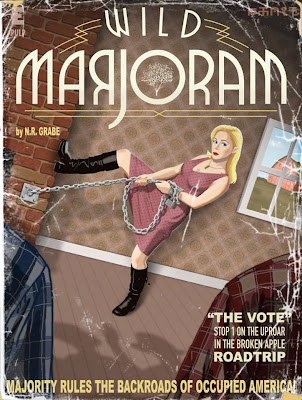 N.R. Grabe has released a new e-pulp called Wild Marjoram. Wild Marjoram is set in glorious Chicagoland in a world where The Great War has never ended and a mechanic gets caught in the underground world of crime, odd inventions and the mystery of the Slates.

The Vote is a tale of Marjoram and Jerry as they cruise into the lion's den in The Broken Apple, what New York City is know called. But this journey turns into chaos for the couple, as they find themselves in the backroads of occupied America.

This leading lady, doesn’t look for trouble, but she sure seems finds it…

Wild Marjoram is a blonde haired blue-eyed mechanic with a locket that holds the key to her past. This perfect Aryan specimen lives in hiding from the Nazi occupation of the United States of the 1930s. If they discovered her, she’ll be condemned to the fate of a broodmare. But she's not the type of girl to give up without a fight.

In “Wild Marjoram: The Vote”, Marj and Jerry go on a road trip to hookup with members of the underground resistance. All seems fine until the rug is pulled out from under our heroes in a bait and switch move where allies turn enemies. The free spirited city girl becomes the prisoner of a country folk tribunal looking to punish an outsider’s sins. Majority rules in their life or death vote!

Wild Marjoram's explosive recipe appeared in the dreams of N.R. Grabe. Its pulp lineage arrives from the likes of "Astounding Stories", "Gangster Stories" and speculative-fiction descendants like "The Handmaids Tale". N.R. has baked her if-it-had-happened-otherwise story with action, intrigue and a cavalcade of colorful characters. We hope you enjoy each bite.

Now, throw away your school books because this Alternate History is uncharted. Keep your eyes open and your head down. You’d better pack an extra drum for your Tommy gun, just in case…

"Wild Marjoram: The Vote" is currently available at your favorite eBookstores.
Download your free preview today!

Posted by BobbyNash at 4:00 PM