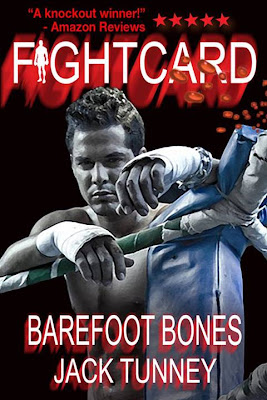 Mentored in the hollows of hardscrabble Georgia by mysterious loner Old Man Winter, then in a Chicago orphanage by ex-fighter Father Tim Brophy, James ‘Barefoot Bones’ Mason has relied on his fists to make his way. But it’s a long way from St. Vincent’s Asylum For Boys to the battlefields of Korea where Bones’ fists may not be enough.

Entered in an inter-camp boxing tournament by his commanding officer, Bones finds himself in a war within a war. When a tenuous cease fire is explosively shattered, Bone’s is fighting against the highest odds of all – staying alive.

Can a skinny kid from the north Georgia mountains survive the hell of Korea and still have the guts to climb back into the ring one more time? The one constant in Bones’ life has been fighting – Lucky for him… he’s good at it.

Read Author Bobby Nash’s thoughts on crafting Fight Card: Barefoot Bones and see what it was like strapping on Jack Tunney’s gloves here.

Posted by BobbyNash at 5:00 AM