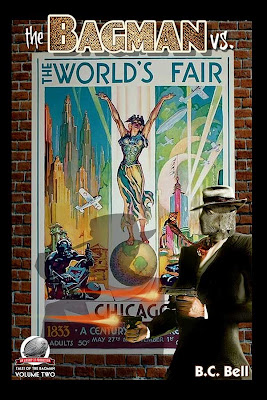 Airship 27 Productions is delighted to announce the release of its latest pulp title, THE BAGMAN vs THE WORLD’S FAIR by B.C. Bell.

It is the summer of 1933 and the Windy City is hosting the fabulous World’s Fair. The famous Navy Pier along the shores of Lake Michigan is invaded by thousands of tourists from around the nation and the world; all there to marvel at the newest scientific advancements on display.

But within this glittering pleasure park of wonder lurks a devilish fiend set upon causing mass destruction and ruining the Fair; a scientist turned mad employing a bizarre sonic cannon to commit murder and chaos amongst the innocent throngs.  Now it will be up to the unlikeliest hero of them all, the odd, notorious Bagman, to save the day.

Writer B.C. Bell sends his one time petty crook, Frank “Mac” McCullough back into action in this, the Bagman’s first full length adventure.  Along with his loyal buddy, the ace mechanic, Crankshaft, Chicago’s most unusual mystery man must find the lunatic inventor and put an end to his heinous attacks before more people will die.

“The first time I read a Chris Bell Bagman story, I actually chuckled aloud,” says Airship 27 Productions Managing Editor Ron Fortier.  “Bell’s ability to combine both fast paced, pure pulp action with slapstick humor is sheer genius. The Bagman is one of the most original of the new pulp heroes we have today.  His fans will not be disappointed with this new, longer adventure.”
The book features nine interiors illustrations by Andy Fish and sports a truly colorful painting by Laura Givens with book designs by Rob Davis.  As an added bonus, the story also features a very special cameo by Canadian writer Calvin Daniels’ own new pulp hero, the Black Wolf.

So slap another clip in your .45, straighten your tie and put that bag over your head, pulp fans; here comes the Bagman, delivering justice in his own peculiar way.

Available now from Amazon in paperback.