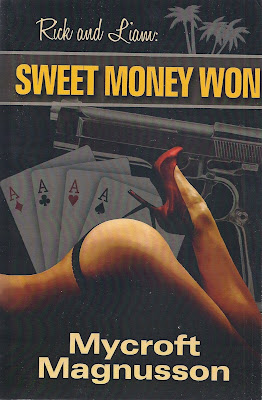 Here’s a trick question for you.  Can any well written book ever be too long for its own good?  I would have thought that impossible until reading “Sweet Money Won.”  Which is going to make this review a delicate balancing act as I want all of you to understand how much I truly liked this book; in many, many ways.  Save one.  So allow me to applaud what is a truly superbly well crafted crime comedy reminiscent of Elmore Leonard’s best efforts.

Rick and Liam are two small time conmen living in the seedy Koreatown section of Los Angeles.  They survive hand to mouth on their meager rewards for the small cons they perpetuate, mostly on middle-class tourist visiting L.A. for the first time.  Magnusson deftly defines both their personalities so that they immediately appealed to this reader.  Liam, the smarter of the two, is the philosophical gambling addict who loves the Boston Patriots whereas Rick is the more reckless, by-the-seat-of-his-pants character who has a  problem with pornography and sex, the latter being what gets them both into a world of hurt.

When Rick takes their entire money reserve to rescue a Russian porn-princess named Svetlana, whom he’s met on-line, from her muscle-bound pimps, he puts them both in harms way.  Liam had placed a bet on a Patriot’s game, the cash being his debt should the Pats lose.  Of course the Pats lose and the Korean strong-arm bookies are none too pleased when Liam doesn’t have the money to cover his bet.  Now he and Rick have just twenty-four hours to come up with twenty thousand dollars.  It is at this point when  Svetlana agrees to help the boys by having sex with and then blackmailing a rich, up and coming congressman.

Reading “Sweet Money Won” is a truly engrossing, fun literary escapade that plays fast and loose with gunfire pacing.  Again, Magnusson’s prose is both insightful and inventive when it needs to be.  His writing is what is excellent and why I’m recommending you pick up a copy of this top-notch crime novel.

But Magnusson has to learn when scenes are extraneous and should be cut.  Any scene that does not serve the plot should be excised and there are several of these that frustrated me.  Rick’s Mexican weekend and Liam’s sports ticket scam are both unnecessary. A good editor could have trimmed this book by a hundred pages and helped shape it into an even better story.  I hope that’s a lesson he learns soon.  Rick and Liam and awesome characters and I’d love to see them in action again.

Posted by BobbyNash at 1:49 PM