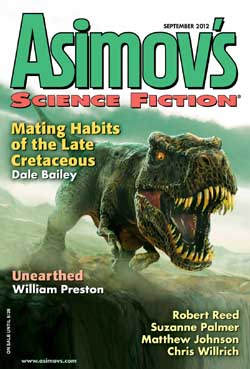 “Unearthed” by William Preston (Asimov's, Sept. 2012, in stores now) is the third story to feature his “Old Man” character. The first two: “Helping Them Take The Old Man Down” and “Clockworks” also appeared in Asimov's (the pair are now available as an ebook) and are already New Pulp classics.
This third tale is the best yet.
As the first two took place in the modern day and the 1960s respectively, “Unearthed” is set in 1925 – right in the meat of pulp's Golden Age. It begins with a Mohawk woman in South America studying a local people who are working a mine for an unnamed owner. When a cave-in occurs, the men stagger out suffering from phantom ailments, and one man is missing. The woman, nicknamed “Qwerty” by her people, must call the mine's owner for help. The owner's simple reply is that he is sending his son, “Little Boss”, to deal with the situation.
For those of you fresh to Preston's work, now might be a good time to mention that the “Little Boss” here and the “Old Man” of the first two tales is one and the same person.
That person, in no uncertain terms, is Doc Savage.
Walking a razor's edge of legality, Preston has given us three new Doc Savage stories – the best Doc tales of the New Pulp era – and the character is never mentioned by name.
Yes, you did read the above statement correctly. And I know what you're thinking: “Hey, isn't Will Murray doing Doc?” Mr. Murray's Doc Savage novels are great reads and each can easily be tacked onto the existing canon of tales, which ended in 1949, and not be out of place. He is to be commended for his ability to channel Lester Dent and provide us rabid New Pulp fans with more classic Doc adventures.
However, William Preston is giving us a Doc Savage for the 21st Century. Forget the travesty that was First Wave or the plethora of comics (good and bad) which came before. Preston's Old Man tales are not only great Doc stories, they are also the best New Pulp tales being written today. Period. And I say that with all due respect to my colleagues who, along with myself, are currently crafting heaps of purple prose for the ever growing audience out there.
In “Unearthed” we meet the “Little Boss” (Doc in his twenties) and Preston captures all of Doc's majesty and imposing presence as soon as he steps onto the stage. In a few lines, he gives Doc more personality than the first 50 Doc novels and this still-learning-the-ropes Doc is as captivating as always. Everything about him is just, well, different than most folks. First we see his medical abilities as he tries to diagnose the strange illness affecting the miners, then he leads Qwerty down into the collapsed mine where they encounter something that will forever shape their destinies. The result is a tale you won't soon forget.
Amidst the action, there is also a deeper layer. During their encounter with the things in the earth, “Little Boss” gets visions of the future and Preston makes the connection between this first, chronologically-speaking, story and “Helping Them Take The Old Man Down” – the first Old Man tale to see print. With a fourth tale in the works, that tie will no doubt be strengthened. With the course of his life now set, “Little Boss's” odyssey truly begins and we are all along for the ride.
“Unearthed” is a great read. Action, heart, and literary prose abound. Preston takes us into the hearts of the characters as deeply as they descend into the bowels of the earth and the pages fly by. The story is everything New Pulp should be: a captivating, larger-than-life adventure yet filled with a wealth of characterization and a evocation of setting the greats of yesteryear could never dream of pulling off as they raced deadlines decades ago. Preston's prose is clean and powerful, demanding close reading to truly appreciate the craftsmanship that went into the tale's construction.
With three unforgettable tales, William Preston has set the standard for New Pulp excellence. Once a publisher rips the stories from the pages of soon-to-be musty magazines and returns them to print in book form, this collection will be the cornerstone of any fan's New Pulp library.
Until that happens, we get to read them they way the first generation of fandom got their pulp thrills, one at a time in magazine form. Pick up the September 2012 issue of Asimov's, then sit back and enjoy a wonderful adventure. “Unearthed” gets my highest recommendation. Expect it to get serious consideration come award season. It is a gem.
Posted by All Pulp at 3:34 PM