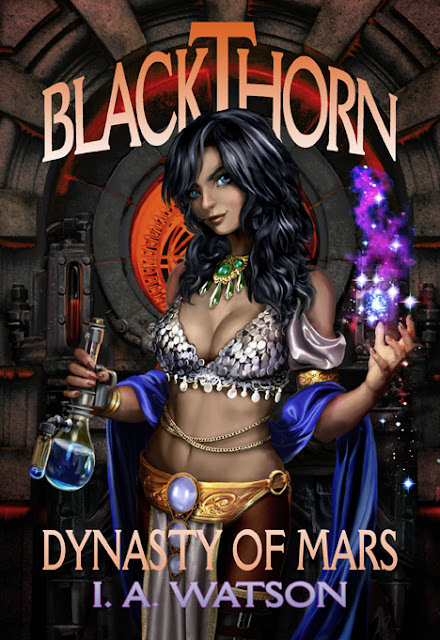 White Rocket Books proudly announces the release in trade paperback and Kindle e-book formats of I. A. Watson’s BLACKTHORN: DYNASTY OF MARS, a new novel that reveals the shocking secrets of Princess Aria while continuing the bold and exciting adventures of John Blackthorn, PulpArk Award winner for “Best New Character of the Year.”
Eldest child of her world’s ruling dynasty, Aria is also the daughter of the evil Black Sorcerer—one of the dreaded First Men of Mars—and has been imbued with his sorcerous might. Rebelling against her father’s tyranny, Princess Aria has joined forces with a human soldier and a savage Mock-Man, and now dares to challenge the First Men’s rule. Will Aria’s power be enough to tip the balance in John Blackthorn’s favor, and free her world—or will she betray the rebels to her father—or worse—and bring all they have fought for crashing down?


BLACKTHORN: DYNASTY OF MARS, by award-winning author I. A. Watson (Robin Hood; Sherlock Holmes) and with a spectacular cover painted by Adam Diller, takes the saga of John Blackthorn and his brave companions to the next level—and beyond—with a grand adventure stretching down the centuries and across the war-torn face of post-apocalyptic Mars!
Created by Van Allen Plexico (Sentinels, Lucian) in the spirit of “Thundarr the Barbarian” and “John Carter of Mars,” the Blackthorn Saga has already been nominated for seven PulpArk Awards and one Pulp Factory Award.  Now, says Plexico, “ Ian Watson has pulled back the curtain and given readers the chance to dig into the rich history of future Mars, and to witness the rise of Princess Aria from pampered aristocrat to powerful leader of a planet-wide rebellion—along with a couple of guys named Blackthorn and Oglok. If you thought you knew the Blackthorn story, you ain’t seen nothing yet!”


White Rocket Books is a leader in the New Pulp movement, publishing exciting action and adventure novels and anthologies since 2005, in both traditional and electronic formats.   White Rocket books have hit the Amazon.com Top 15-by-Genre and have garnered praise from everyone from Marvel Comics Vice-President Tom Brevoort to Kirkus Reviews.
On sale as of July 28, 2012, BLACKTHORN: DYNASTY OF MARS is a 250-page, $15.95, 6x9 format trade paperback from White Rocket Books, and a $2.99 e-book for Kindle.