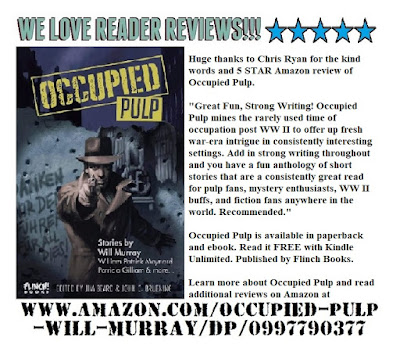 WE LOVE READER REVIEWS! Huge thanks to Chris Ryan for the kind words and 5 STAR Amazon review of Occupied Pulp. You can read more reviews and learn more about Occupied Pulp HERE.

"Great Fun, Strong Writing! Occupied Pulp mines the rarely used time of occupation post WW II to offer up fresh war-era intrigue in consistently interesting settings. Add in strong writing throughout and you have a fun anthology of short stories that are a consistently great read for pulp fans, mystery enthusiasts, WW II buffs, and fiction fans anywhere in the world. Recommended."
Occupied Pulp is available in paperback and ebook. Read it FREE with Kindle Unlimited. Published by Flinch Books. 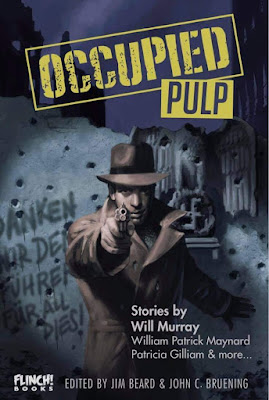 The end of World War II brought with it a renewed chance for peace, hope, and prosperity to the strife-ridden nations across the globe, but for some people treachery, intrigue, and conflict was in their blood…whether they liked it or not.

You’re enlisted to join forces with six stalwart pulp writers as they march into occupied territory in post-war Germany, Italy, and Japan. The Axis Powers have been vanquished, though in some camps the news either falls on deaf ears, or is a signal to work even harder to bring about the downfall of freedom-loving people everywhere.

OCCUPIED PULP offers all the two-fisted, slam-bang action and adventure that are hallmarks of the pulp tradition. Along the way, you’ll encounter fascinating heroes and villains who wage a mighty struggle to either protect the fragile peace or set the wheels of conflict and destruction back in motion.

Stay vigilant! Some enemies have not yet laid down their arms! 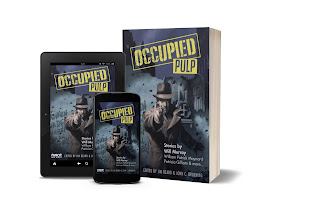 Having assisted in the Vistula–Oder Offensive and made part of the major advance into German-held territory where the Red Army captured Kraków, Warsaw, and Poznań, the Night Witches, a squadron of all-female pilots, were scheduled to stand down and be disbanded. Ace pilot Yelena Olva disobeys orders for a mission of revenge against the German officer who had captured and tortured her months earlier. After overhearing a communique that the German officer is making overtures of collaborating with Allied Forces to bargain for his freedom, Yelena cannot let this monster live. Though she knows it means imprisonment at best and death at worst, she sets out to kill one last enemy before he makes his final escape.