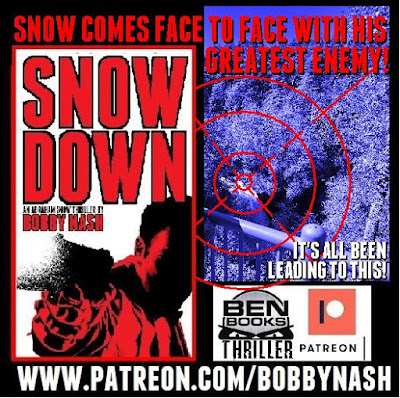 Are you ready for some #FreshSnow? SNOW DOWN, the serialized novella by author Bobby Nash continues at https://www.patreon.com/bobbynash

Alone in a winter mountain wonderland, Abraham Snow comes face to face with his greatest enemy for one final showdown. Threats are made, promises broken, and secrets revealed as Snow finally learns the identity of the person who blew his cover way back in Snow Falls. It's the beginning of the end as #TheSummerOfSnow heats up in this all-new chapter of Snow Down! Get ready for a brand new #SnowDay as SNOW Series 1 heads toward its epic conclusion!

A Patreon exclusive, SNOW DOWN is written by Bobby Nash. Cover art by Dennis Calero. Later, an audio book narrated by Staurt Gauffi will be released. Published by BEN Books. Get in on the action now for as little as $1 a month. Learn more about SNOW at www.abrahamsnow.com

Bobby
Posted by BobbyNash at 10:50 AM