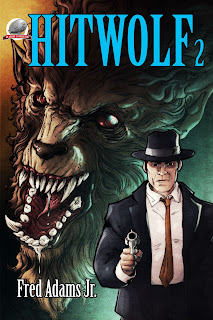 Airship 27 Productions is thrilled to be releasing the exciting sequel to Fred Adams Jr. crime/horror thriller “Hitwolf.”  In “Hitwolf 2 – The Pack” the hunt continues.

Oct. 1969.  It has been several months since veteran Green Beret Jim Slate escaped captivity at the hands of New Jersey mob boss, Michael Monzo.  Employing a mercenary wizard, Monzo had transformed Slate into a werewolf with the intentions of using him as his own personal “hitwolf.”  But Slate managed to foil Monzo and fled to the New Jersey wilderness known as the Barrens.

There he rendezvoused with three of his former army pals and related his harrowing experiences.  Knowing the mob will never stop hunting Slate, the team heads for the swamps of Chambliss, Georgia to hide out.  At their request, Slate turns Swede and Haines into werewolves while the third, Singer, opts to remain the solo “normal” one of the squad.  Things get worst when, through some Washington contacts, Slate learns he was betrayed by his former C.I.A. liaisons in Nam.  Now they have added their considerable resources in capturing him and the others.

Determined to use their new found abilities only to defend themselves against their enemies, Slate walks a delicate tightrope hoping the beasts he and his mates carry in their veins can be controlled.  If not, then all hell will break loose and even the blood of the innocent will flow.

“Fred Adams Jr. is one of the best New Pulp writers in the field today,” says Airship 27 Production Manager, Ron Fortier.  “His work is always fresh, original and fast paced.  The classic hallmarks of excellent pulp-fiction.  When Adams wrote HITWOLF,  we knew we had a winner on our hands.  It’s a creepy blend of gangster and horror genres mixed to taut, suspenseful perfection.  And it was ripe for sequels.  Now he delivers THE PACK and the action picks up exactly where book one ended.”

Artist Zachary Brunner provides the stunning cover with Clayton Hinkle doing the interior illustrations.  All whipped together by Award Winning Art Director Rob Davis to offer up another over-the-top thriller by the one and only Fred Adams, Jr.  Bolt the doors, put on the lights and get ready for a fun chiller of a ride.