Click Read More... to learn more about these titles.

BEN Books is pleased to announce that the re-release version of author Bobby Nash’s debut novel, EVIL WAYS is now available for purchase in paperback and ebook formats.

Originally released in 2005 as a paperback (followed by a limited hardcover edition a few years later), Evil Ways was the first published novel for author Bobby Nash. “There was a feeling of joy I just can’t explain,” said Nash of holding those initial copies of his first published novel back in September of 2005. “I was so excited. I smiled for a week. It was thrilling,” adds Nash. “With this re-release, I’m excited to get the book back in the hands of readers. Even more exciting is launching Evil Ways as an ebook for the first time.”

As for the future of the characters, Nash announced that the second book in the Harold Palmer Thriller Series, titled Evil Intent, is underway for a 2014 release. “From there, hopefully we get to do a book three, then four, and so on,” Nash added, smiling at the prospect of seeing his characters continue. “With both The Harold Palmer Thrillers and The John Bartlett/Benjamin West Thrillers (Book 1: Deadly Games! is available now), not to mention my other writing projects, it looks like I’ve got a lot of writing ahead of me.”

About Evil Ways:
FBI Agent Harold Palmer needed a relaxing vacation. All he wanted was to travel to Sommersville, Georgia to visit his brother, newspaper publisher and reporter, Franklin Palmer. He should have known better.

The graduating class of 2002 have returned to Sommersville for their ten year high school reunion, timed to coincide with the annual Sommersville Autumn Festival.  Classmates coming from all over to reconnect, retell old stories, and have a great time reminiscing.

The discovery of a brutally murdered young lady with a connection to the local police, coupled with a rowdy high school reunion and the annual Autumn Festival has Sommersville Sheriff Tom Myers and his deputies overwhelmed.

Agent Palmer finds himself on the trail of a killer who preys on the fears of his victims. His next targets are the unsuspecting members of the reunited class of ‘02.

They should fear his EVIL WAYS.

It all starts here. 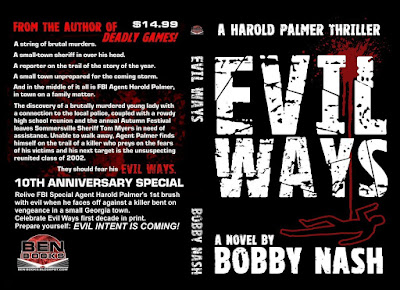 A madman's death triggers the most deadly game of all!

They played the most dangerous game of all and death was only the beginning...

Today, Morehouse, still a master game player and manipulator, commits suicide while in prison. His death initiates one final game of survival for the people Morehouse felt wronged him the most. At that top of the list are Bartlett and West, who must set aside their differences to save the lives of Morehouse's other victims and solve one last game before a dead man’s hired killers catch them and his other enemies. 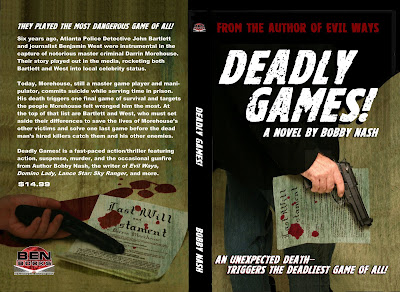 HUMANITY HAS GONE TO THE STARS.

Earth, once barren and decimated by war and the depletion of natural resources has been reborn.

Today, Scavengers prey on small mining towns and colonies. The United Planetary Alliance Marshal's Service seems unable to stop these raids. They are outmanned and outgunned, but is the only law on many colonies.

Newly promoted Captain, Virgina Harmon takes command of her first starship, the Pegasus, the latest ship built to solve the Scavenger problem. Plagued by nervousness over her first command Captain Harmon is rocked by the news of her mentor’s murder.  Just days before he was to report to her aboard the Pegasus as chief of engineering.

In Earth orbit, a science station becomes a target.  An enemy has a plan to use the Space Lab facility as a means to claiming Earth.

In deep space, the United Planetary Alliance city-ship Ulysis welcomes aboard a high-ranking officer with a special mission for the crew.  Those plotting against the Alliance are preparing to make their move and their first target is the Ulysis.

Meanwhile, in the deepest regions of space an enemy has returned.  An enemy seeking vengeance.

Frontier collects 9 sci fi short stories from Bobby Nash, author of Earthstrike Agenda, Evil Ways, and Deadly Games! Some of the rare tales presented in Frontier are reprints and others are in print there for the first time. The stories that make up Frontier happen on Earth, on alien planets, and in the deepest recesses of space. There’s action, adventure, horror, and even a little romance.

SAMARITAN
In deepest space, a research vessel rescues a survivor who asks to be returned home. The catch: her planet lies at the center of a black hole.

DREAMWEAVER
Nathanial “Doc” Dresden wakes up in space, free floating above the moon. But he is not alone.

WHERE HAVE ALL THE MONSTERS GONE?
Nathanial “Doc” Dresden and his team investigate bizarre happenings.

MIDWAY
A meteor storm damages Midway station, a museum storage facility and frees an ancient creature from its icy tomb.

JUST ANOTHER SATURDAY ON OUTPOST 9
When war breaks out between neighboring worlds, the Outpost 9 space station is caught in the crossfire. Dr. Erin Moonshadow tries to save lives as chaos reigns around her.

THE DROP
War. Ground troops are dispatched. Dropped from their starship, the troop transport is attacked and one of the soldiers is lost. Then things get strange.

NIGHTMARE IN AMBER
Are a young man’s dreams of an interstellar war a product of his imagination or a prophecy of things to come?

THE GARDEN
A survey crew discovers a veritable Garden of Eden. Is this paradise or is there a serpent in hiding, waiting to strike?

A JOURNEY INTO MYSTERY
A one-page story that was doubled as an advertisement for a convention where Bobby was a guest. A fun experiment.

Illustrations in Frontier are by Bobby Nash and Jeff Austin. 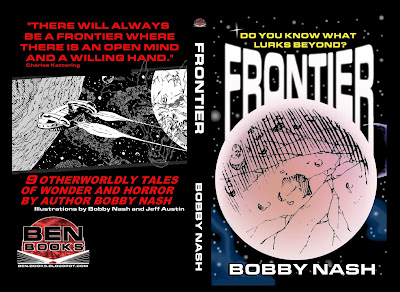 You can listen to MIDWAY as written and performed by Bobby Nash here free.

The science ship Aquarius, under the command of Captain Jeremiah Rains has finally reached the end of its exploratory mission to the depths of uncharted space and is returning home to Earth.

Captain Rains and his skeleton military crew are tired and bored from the lack of adventure they expected to find out in the great beyond. The scientists, however, are extremely happy with their many discoveries.

When the ship comes upon the wreckage of a destroyed space vessel, the crew is surprised to find one survivor; a woman, quite possibly the most beautiful woman any of them have ever seen. Her name is Lari and all she wants is someone, some Good Samaritan, to take her home.

The catch is that her planet is located at the center of a black hole.

SAMARITAN is a novella by author Bobby Nash.

Posted by BobbyNash at 9:18 AM