FORTIER TAKES ON 'THE ZEPPELIN'! 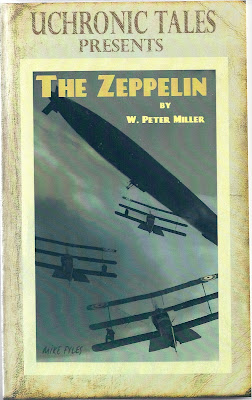 Recently I reviewed a short digest novella from Moonstone Books and mentioned liking this handy format for a quick, enjoyable reading experience. Well, California based writer, W. Peter Miller has launched his own series of such small paperbacks called “Unchronic Tales,” and the first one is entitled, “The Zeppelin.”
Now from the back cover copy, we’re told that these books will be set in an alternate world which is much like our own but then again different in some pretty startling and unique ways.  And make no mistake about “Unchronic Tales,” they are definitely part of the New Pulp Fiction movement sweeping the literary world today.
The hero of this first novella is American Agent Clark Tyler who has gone over to England at the start of World War One to enlist and do his part.  When a super Zeppelin, the Eisern Feist, attacks London one night, British Intelligence learns the bombing raid is actually a cover up for a more sinister German mission.  The Germans have kidnapped the daughter of famous scientist and are bringing her back to Berlin to utilize the special formula she now possesses, a formula that bestows her with a rather unbelievable ability.
Thus it is that she must be rescued at all cost and Tyler and his team fly off in modified tri-planes to overtake the dirigible, get aboard her and find the young lady before the massive airship can cross the channel and reach Germany.
Miller’s writing is pulp-perfect and the action nonstop from beginning to end. Tyler is a great, stalwart champion and the young, lovely scientist a spunky spitfire capable of holding her own when the action kicks into high gear. But before they can successfully complete her rescue, both of them will have to battle their way through an entire crew of German airmen and a team of highly trained, deadly German Commandos.
Having relished this great little book, this reviewer is looking forward to digging into the second titled, “The Horn.”  If it is as good as, “The Zeppelin,” we pulp fans have much to celebrate.
Posted by All Pulp at 9:01 PM