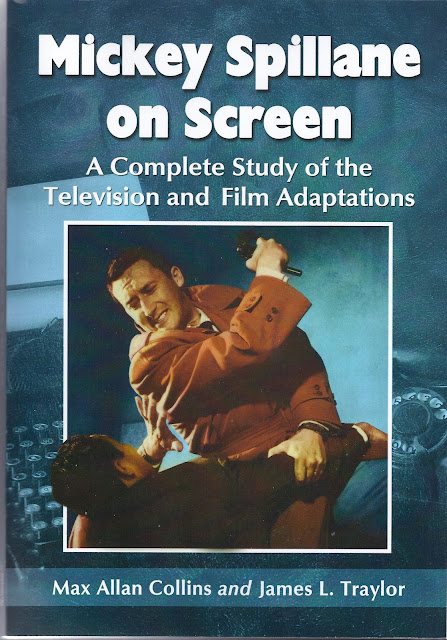 Scholarly treatises such as this volume, which examines the film and television adaptations of mystery writer, Mickey Spillane, run the risk of committing the most ironic literary sin of them all; producing a boring book about an entertaining subject. A large part of Spillane’s success, beside devising clever plots, was his gift of writing  stories that brought a great deal of joy to his readers. Perhaps no other popular writer of the 20th Century ever connected so powerfully with the American post World War II psyche as did Spillane, which in itself is no great puzzle.  Spillane was very much a product of his times, a veteran and every day working stiff who saw returning GI’s with true empathy. He was one of them.
By the late 1940s Spillane was writing about a tough guy private eye with an Old Testament philosophy.  Sickened by the horrors of a world war, Mike Hammer, had had a belly full of evil and injustice and wasn’t going to take it anymore.  His singular voice was one of righteous indignation unwilling to capitulate to the powerful elite eager to profit from a society weary of conflict.  These were the new carpetbaggers whose target of their greed were the innocent, decent people trying to build new lives. Without being asked, Hammer found himself the wolf at the door, protecting the sheep against all the other wolves.
By the time Hollywood came knocking, his books were world wide best sellers and Spillane’s legions of fans were anxious to see his rough and tumble tales brought to the silver screen. Sadly, the results of those adaptations weren’t always pleasurable either to Spillane or his devotees.  Some went on to achieve cult status while others drifted into TV late night obscurity barely remembered today. In this extensive and wonderfully presented study, Collins and Traylor set the records straight, giving each Spillane film and television series a thorough and insightful inspection.  Their unbiased criticisms of the good, the bad and the ugly are all well researched reports from cast bios to screen writers’ credits.
Some of the surprises contained detail the ideological differences between conservative Spillane and left-leaning producer Victor Saville and his partner director, Robert Aldrich. Both Saville and Aldrich clearly despised the character of Mike Hammer and attempted to paint him in a negative light via their version of “Kiss Me Deadly,” with actor Ralph Meeker as Hammer.  Yet, as explained in the book, it was this very antagonism that ironically resulted in perhaps the finest Mike Hammer movie of all time.  Go figure.
Another highlight is their look at “The Girl Hunters,” a British blank and white production in which Spillane took on the role of his most famous creation and played him to screen perfection; perhaps the only writer to ever do so in film history.
This and other installments offer long forgotten vignettes from both Spillane’s associates and often relate Spillane’s own documented opinions of these adaptations, pro and con. We especially appreciated their closing the book with reprinting one of the last interviews Spillane gave to Collins, neatly summarizing his own personal and caustic observations on these various teleplays.
“Mickey Spillane On Screen,” is a thoughtful examination of one of the greatest mystery writers in American history and the celluloid treatment of his works.  It should have a place of honor in every film and mystery lovers’ library.
Posted by All Pulp at 11:46 AM