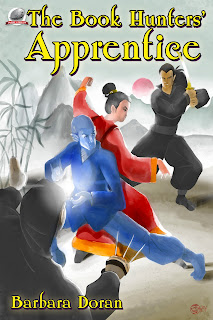 Qing began life as a prized the little prince’s prized golden carp living carefree in a delightfully pond on the royal estate. Then one day he ingested a magical soul stone and found himself evolving into consciousness. With this came other abilities such as being able to flight and change his shape; even into human form.

All of which would have been terribly confusing and maybe dangerous until he encountered the gifted Book Hunter Master Zhi Wanku who was instantly captivated by him. Enough so that she offered to accept him as her apprentice and teach him the proper way to continue his growth into a fully realized dragon.

From that moment on their adventures together were the stuff legend and along their journeys they encountered all kinds of weird and bizarre people and creature. Some would become staunch allies in their battle against the sorcerer Zhu Khan and his army of puppets locked away in might mountain fortress.