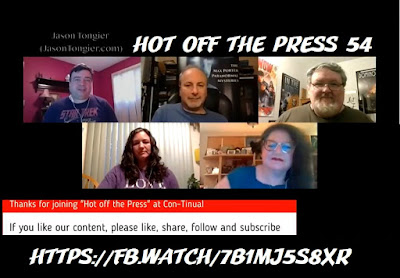 I was thrilled to be part of Continual's Hot Off The Press episode 54 with some talented authors. Watch it HERE. Coming soon to YouTube.
Bobby 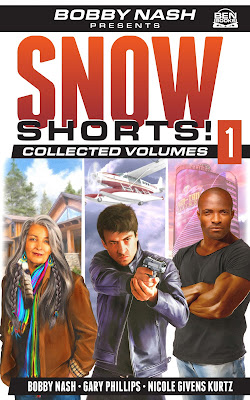 SNOW SHORTS VOL. 1
An Action/Thriller Collection
Declassified at last! Snow Shorts delve into the adventures of Abraham Snow, his family, and his friends in short, bite-sized action/thriller tales. Volume 1 contains stories by today’s top talent featuring Abraham Snow, Big John Salmon, and introducing Mama Snow herself in Laura Snow’s first in story appearance. Snow Shorts Vol. 1 is now available in paperback and ebook. Read it FREE with Kindle Unlimited. Audio coming soon. Individual Snow Shorts stories are still available as $0.99 ebooks. Find links to all at www.abrahamsnow.com.Snow Shorts Vol. 1 Table of Contents:Snow Flies featuring Abraham Snow by Bobby Nash.Abraham Snow goes undercover and takes to the air when a pilot friend of his goes missing. The trail leads him to a casino, smugglers, and dangerous skies. Can Snow disrupt the smuggling operation and save his friend and their unexpected passengers before they’re shot down? Snow Flies was a 2020 Pulp Factory Award Nominee for Best Pulp Short Story.
Thieves’ Alley featuring Big John Salmon by Gary Phillips.Big John Salmon had built a new life for himself after being incarcerated. But now an old friend, an unrepentant thief was dying in a prison hospital in the high desert. Pulled back in by personal honor as the man’s family is under threat, Big John is recruited to carry off one last heist -- against a quirky billionaire’s fortified penthouse atop the Phan-Tan Casino under heavy guard. Yet the prize wasn’t money. Squeezed by forces known and unknown, Salmon once again walks down thieves’ alley as he puts his plan in motion. Calling on an edge forged in the fires of adversity might tip the odds in his favor to make it out alive…or wind up on the slab.A Stranger Calls featuring Laura Snow by Nicole Givens Kurtz.Laura Snow (mother of Abraham, Douglas, and Samantha) is enjoying her life. A free spirit, Laura follows her bliss. The journey leads her to Taos, New Mexico where she has created a life for herself away from the dangers her family often finds themselves facing. Or so she thought. Laura is concerned when she starts receiving threatening phone calls and texts. A mysterious someone is stalking her and the threats are escalating. When official channels fail, Laura falls back on old skills she learned years ago from her father-in-law, Archer Snow to protect herself against a dangerous foe who wants her dead.SNOW SHORTS Vol. 1 is available at the following retailers:Amazon US (ebook)Amazon UK (ebook)Amazon CA (ebook)Amazon DE (ebook)Amazon FR (ebook)Amazon ES (ebook)Amazon IT (ebook)Amazon NL (ebook)Amazon JP (ebook)Amazon BR (ebook)Amazon MX (ebook)Amazon AU (ebook)Amazon IN (ebook) Amazon US (paperback)Amazon UK (paperback)Amazon CA (paperback)Amazon DE (paperback)Amazon FR (paperback)Amazon ES (paperback)Amazon IT (paperback)Amazon NL (paperback)Amazon JP (paperback)Amazon MX (paperback)Amazon AU (paperback)Amazon IN (paperback)
#####
Posted by BobbyNash at 7:47 PM