WE LOVE READER REVIEWS! FOUR NEW STARS FOR NIGHTVEIL: CRISIS AT THE CROSSROADS OF INFINITY! 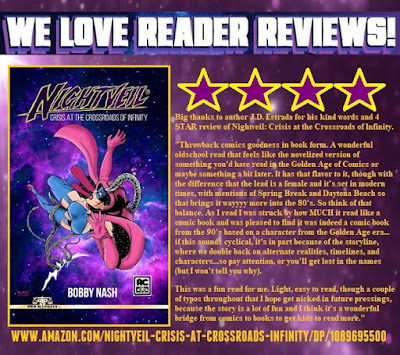 WE LOVE READER REVIEWS! Big thanks to author JD Estrada for his kind words and 4 STAR review of Nightveil: Crisis at the Crossroads of Infinity.

"Throwback comics goodness in book form. A wonderful oldschool read that feels like the novelized version of something you'd have read in the Golden Age of Comics or maybe something a bit later. It has that flavor to it, though with the difference that the lead is a female and it's set in modern times, with mentions of Spring Break and Daytona Beach so that brings it wayyyy more into the 80's. So think of that balance. As I read I was struck by how MUCH it read like a comic book and was pleased to find it was indeed a comic book from the 90's based on a character from the Golden Age era... if this sounds cyclical, it's in part because of the storyline, where we double back on alternate realities, timelines, and characters...so pay attention, or you'll get lost in the names (but I won't tell you why).

This was a fun read for me. Light, easy to read, though a couple of typos throughout that I hope get nicked in future pressings, because the story is a lot of fun and I think it's a wonderful bridge from comics to books to get kids to read more."

Thanks again, J.D. I'm glad you liked it.

Nightveil: Crisis at the Crossroads of Infinity is available in paperback and ebook. You can read it for FREE if you subscribe to Kindle Unlimited.

Learn more about Nightveil: Crisis at the Crossroads of Infinity below. 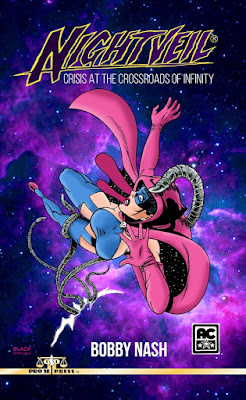 NIGHTVEIL: CRISIS AT THE CROSSROADS OF INFINITY
A digest novel by Bobby Nash

2020 THE PULP FACTORY AWARD WINNER:
BEST PULP NOVEL - BOBBY NASH
2020 THE PULP FACTORY AWARD NOMINEE:
BEST PULP NOVEL - BOBBY NASH
BEST PULP COVER - BILL BLACK
AC COMICS’ MYSTICAL MAID OF MIGHT RETURNS TO PROSE ONCE MORE! BOBBY NASH’S ‘NIGHTVEIL: CRISIS AT THE CROSSROADS OF INFINITY’ NOW AVAILABLE!
Pro Se Productions proudly presents its second digest novel in its AC COMICS imprint featuring characters licensed from one of the best known independent comic companies in history, known for FEMFORCE, CAPTAIN PARAGON, and a whole cast of other characters.  Award winning author Bobby Nash fulfills a long time dream of his own with NIGHTVEIL: CRISIS AT THE CROSSROADS OF INFINITY, now available in print and digital formats.
At the edge of infinity, chaos reigns. A powerful enemy seeks to destroy the barrier that guards the Crossroads of Infinity, the mystical vortex at the center of the multiverse. One hero continues to thwart this sinister scheme time and time again, the mystical maid of might known as Nightveil. Undeterred, the villain is determined to complete her task, even if she has to kill the Nightveil of every single divergent dimension to do it. Get ready for a crisis that could bring about the end of not only Nightveil, but the multiverse as we know it in award winning author Bobby Nash's NIGHTVEIL: CRISIS AT THE CROSSROADS OF INFINITY, featuring characters created by and licensed from AC Comics.
Featuring an excellent cover by AC Comics’ own legendary Bill Black, and print formatting and cover design by Antonino Lo Iacono and Marzia Marina, NIGHTVEIL: CRISIS AT THE CROSSROADS OF INFINITY is now available.
Nightveil: Crisis at the Crossroads of Infinity is now available for purchase at the following:
AmazonUS (paperback)
AmazonUK (paperback)
AmazonCA (paperback)
AmazonUS (ebook)
AmazonCA (ebook)
AmazonUK (ebook)
More to follow.
For more information on this title, interviews with the author, or digital copies for review, email editorinchief@prose-press.com.
To experience NIGHTVEIL and other AC characters in their comic adventures, check out https://accomics.com.
To learn more about Pro Se Productions, go to www.prose-press.com. Like Pro Se on Facebook at www.facebook.com/ProSeProductions.
Read it FREE with your Kindle Unlimited subscription.
Published by Pro Se Productions.
Officially licensed from AC Comics. 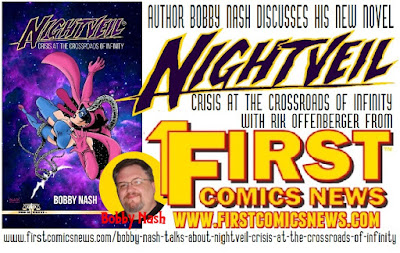 Big thanks to Rik Offenberger and FirstComicsNews for their continued support and sharing of my work. It is appreciated. Check out this new interview where Rik and I talk about my latest release, Nightveil: Crisis at the Crossroads of Infinity at www.firstcomicsnews.com and why you should pick up a copy.
Direct link: https://www.firstcomicsnews.com/bobby-nash-talks-about-nightveil-crisis-at-the-crossroads-of-infinity
#####
Posted by BobbyNash at 10:28 AM