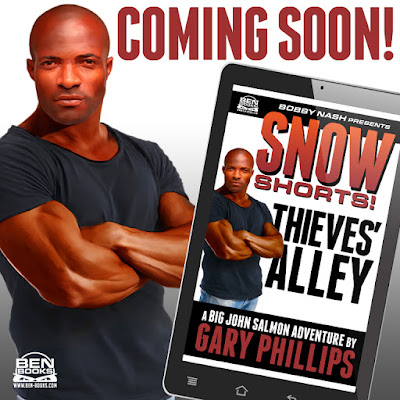 BEN Books is excited to announce the second release in the new SNOW SHORTS series featuring new adventures of Abraham Snow and friends from the hit Snow series created by Bobby Nash.

Snow Shorts #2 is Thieves’ Alley by award-winning author Gary Phillips.
Snow Shorts cover art is by Jeffrey Hayes of PlasmaFire Graphics.
About Thieves' Alley:
Big John Salmon had built a new life for himself after being incarcerated. But now an old friend, an unrepentant thief was dying in a prison hospital in the high desert. Pulled back in by personal honor as the man’s family is under threat, Big John is recruited to carry off one last heist -- against a quirky billionaire’s fortified penthouse atop the Phan-Tan Casino under heavy guard. Yet the prize wasn’t money. Squeezed by forces known and unknown, Salmon once again walks down thieves’ alley as he puts his plan in motion. Calling on an edge forged in the fires of adversity might tip the odds in his favor to make it out alive…or wind up on the slab.

From the pages of the SNOW series comes a new Snow Short featuring Big John Salmon by author Gary Phillips.
"I am thrilled to welcome Gary Phillips to Team Snow," said series creator, Bobby Nash. "Although, it's probably more accurate to say 'welcome home' as Gary was editor on Snow Falls when it was originally released before it moved to BEN Books. Gary is a fantastic storyteller and Big John is in good hands."

“I am thrilled to have these amazing writers add their unique voices to the Snow series,” says Bobby Nash of the announcement. “Each of these authors bring a new dynamic to the characters and I’m excited to read these stories.”

SNOW SHORTS will be released as $0.99 stand-alone ebooks. When there are three Snow Shorts completed, they will be collected in the same 5”x8” paperback format as the Snow novellas and in collected ebook and audio formats. For those collecting the 6”x9” Snow Series collections, Snow Shorts will be collected in that format after three novella-length collections are released. The 6”x9” format will be available in paperback, hardcover, collected ebook, and collected audio. We understand the desire to keep your collection in a uniform format so BEN Books is working hard to get readers their Snow fix. If you’re a Kindle Unlimited subscriber, the entire SNOW library, as well as all BEN Books titles can be read for FREE.

The first SNOW SHORT titled SNOW FLIES and written by series creator, Bobby Nash released in January as a $0.99 ebook. It is still on sale HERE. Barring unforeseen circumstances, a new Snow Short will debut each month.

In addition to SNOW SHORTS, the Snow novella series continues as well when Snow series 1 wraps up this Spring with SNOW DOWN before Series 2 begins this Summer with SNOW HUNT. 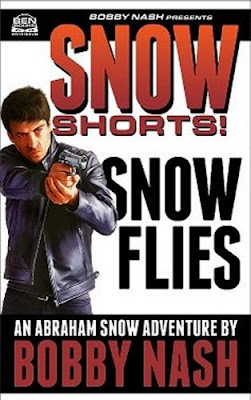 SNOW SHORTS #1
SNOW FLIES by Bobby Nash
Abraham Snow goes undercover and takes to the air when a pilot friend of his goes missing. The trail leads him to a casino, smugglers, and dangerous skies. Can Snow disrupt the smuggling operation and save his friend and their unexpected passengers before they’re shot down?Snow Flies was nominated for a 2020 Pulp Factory Award for Best Pulp Short Story (a shorter version of this story originally appeared in Paul Bishop Presents… Disorderly Conduct: Another Ten Tales of Murder and Mayhem).
Snow Shorts #1 Snow Flies is available at the following retailers:
Amazon US
Amazon UK
Amazon CA
Amazon DE
Amazon FR
Amazon ES
Amazon IT
Amazon NL
Amazon JP
Amazon BR
Amazon MX
Amazon AU
Amazon IN
Posted by BobbyNash at 10:57 PM