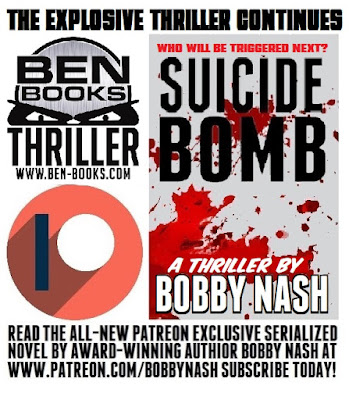 The serialized thriller by author Bobby Nash continues with a new chapter each week. Patreon subscriptions start as low as $1 a month. $5 and up enrolls you in the ebook(s) of the month club.

The story so far...
A methodical killer known only as The Controller has nearly perfected a procedure that can turn anyone into an assassin from afar. After carrying out the pre-planted assignment, the assassin then kills themselves. DC Metro Homicide Detective Catherine Jackson has been assigned a case that puts her on The Controller's radar and he has become fascinated with her. Agent Patterson discovers that The Controller has turned a Secret Service Agent into the next suicide bomber. When she confronts the agent, he opens fire in the Oval Office. This chapter, we check in on some of our other players who find themselves in sudden danger.

Just a head's up! SUICIDE BOMB is an adult suspense/thriller. There's a good deal of murder, death, mayhem, and terror taking place in this story. There will even be some cussing and sex too. Please be aware of that going in. If it were a movie, I suspect it would have an R rating. You've been warned. There will be some adult language.

Please, join us and sit back, have fun, and enjoy the carnage and mayhem of SUICIDE BOMB.

As always, I appreciate your support. Feedback is also welcome and appreciated.

Bobby
Posted by BobbyNash at 6:23 PM