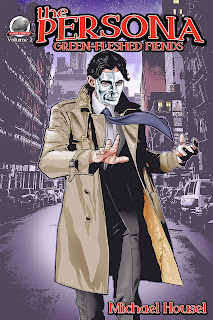 Airship 27 Productions thrilled to announce the release of writer Michael Housel’s second Persona adventure. Since becoming chosen to be the new mystic warrior known as the Persona, Michael Mansford has tried his best to live as normal a life as possible. But all too soon he’s once again called upon to battle weird evil forces beyond the understanding of modern science. A German scientist has created a machine allowing him to mental create new realities. From these alien like dimensions emerge green, dwarfish creatures that seem harmless at first but are soon followed by monstrous being set upon the total destruction of our own reality.

Once again the Persona is called upon to battle unspeakable evil and is aided by his Brink Town friends and his girlfriend, Stacey Standish. But can even his amazing powers prevail over an imaginary world created from a twisted mind wanting to play god.

“I’m reminded a great deal of the Phantom Stranger,” when reading the Persona adventures,” says Airship 27 Productions’ Managing Editor Ron Fortier. “Michael Housel as a truly out-there imagination and captures some of the most bizarre scenarios I’ve ever encountered in fiction. This new story is no exception.”  Artist Kevin Paul Shaw Broden supplies the perfect illustrations and the cover was drawn by Chris Rawding “Together these creators have produced another unforgettable magical pulp thriller our readers won’t soon forget.”

Available now in paperback at Amazon and soon on Kindle.