#TheSummerofSnow continues on The Story Geeks in July! 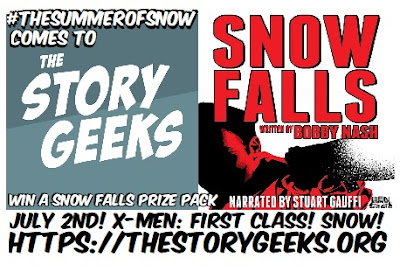 #TheSummerofSnow comes to The Story Geeks Podcast on July 2nd as Jay and Daryl begin their look at the X-Men series with a deep-dive into X-Men: First Class along with guest Author Bobby Nash.

Also, one lucky winner will win a SNOW FALLS prize pack including Snow Falls ebook and audiobook, written by Bobby Nash and narrated by Stuart Gauffi. Published by BEN Books. You get all of this and more at https://thestorygeeks.org beginning July 2nd!

We hope you'll join us.

Learn more about Snow Falls below.

Your summer forecast calls for Snow!

It's The Summer of Snow at BEN Books! Get caught up on Abraham Snow's adventures at Snow Central! Snow's adventures can be read for FREE if you have a Kindle Unlimited subscription. Also, if you sign up for Audible, you can download two Snow audio adventures for FREE. What a fantastic deal! #thesummerofsnow

“Bobby Nash is my 'go to' guy for thrills and kills on the page, and Snow is why...”
-- Paul Bishop, author of Lie Catchers, Croaker

Posted by BobbyNash at 7:51 PM