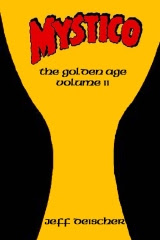 Mystico the second volume of the Golden Age series by New Pulp Author Jeff Deischer is available at Createspace and Amazon. You can find it here. Jeff posted the first chapter here.

About Mystico:
THE QUEST FOR ULTIMATE POWER

1940: The Nazis are obsessed with mystical artifacts. Believing one was hidden in America centuries ago by the mysterious Knights Templar, the black wizard Nacht sends a party led by the sorcerer the Baron to find it.

Nacht is as much a mystery to the Nazi hierarchy as he is to the rest of the world. Claiming to be one of the Earth's "secret masters", he helped Hitler climb to power after the failed 1923 beer hall putsch, tutoring him in occult ways. He is aided in his quest by Reinhard Heydrich, the infamous "Hangman", who now controls the dreaded Vril power, becoming Nietzsche's Ubermensch.

In this exciting prequel to the groundbreaking The Golden Age, the Auric Universe's mystical heroes must join forces to stop Nazi Germany from gaining one of the greatest prizes of all!

Posted by BobbyNash at 9:42 AM