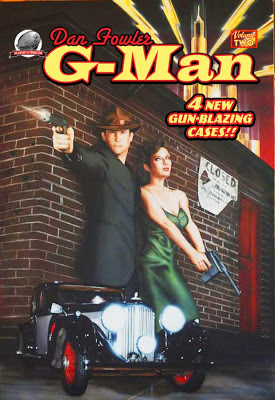 Airship 27 Productions is thrilled to announce their fifth release of the year; DAN FOWLER G-Man Vol II.  Volume One was published two years ago and well received by pulp fans warranting a second foray into the world of this classic tough guy federal agent.

One of the greatest pulp heroes of old returns in four gun-blazing new adventures.  Dan Fowler, ace investigator for the FBI, is back action, this time facing off against quartet of deadly villains; from a hideous monkey faced gang boss to avenging the murder of an uncover agent.  Along the way he’ll team up with a colorful assortment of allies from a sexy jewel thief to the none other than Jim Anthony, the Super Detective.

Writers Derrick Ferguson, Aaron Smith, Joshua Reynolds and B.C. Bell have whipped up four of the most fast paced, nail biting crime thrillers ever to grace any pulp collection.  Dan Fowler is an iconic pulp hero who, during the course of his original series, battled criminals and outlaws from rural hick bootleggers to the organized syndicates of New York and Chicago.

“Dan Fowler was by far one of the most successful classic pulp characters ever created,” declares Airship 27 Productions’ Managing Editor, Ron Fortier.  “If you start talking about any kind of crime fighting series, pulp fans will immediately bring up his name. It is synonymous with this particular genre of pulps. He was pretty much the Dick Tracy of the pulps. Airship 27 Productions is thrilled to be bringing him back into the spotlight of new pulp fiction with these original thrill-a-minutes tales.”

Wrapped up by a gorgeous cover from Brian McCulloch and featuring wonderful black and white interior illustrations by Neil T. Foster, DAN FOWLER G-MAN Vol II was designed by Rob Davis and edited by Ron Fortier.  So move over Elliot Ness and Melvin Purvis, here comes the great G-Man of them all, DAN FOWLER!!!

Now on sale at Amazon.

Posted by BobbyNash at 3:08 PM