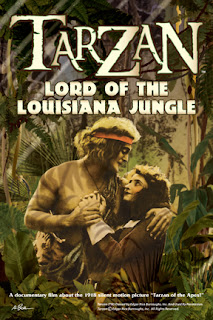 In August of 1917 an eclectic band of filmmakers, actors and circus acrobats fought malaria, unbearable heat and the swamp of the Louisiana Atchafalaya River Basin to bring to the silver screen the best-selling book “Tarzan of the Apes” by Edgar Rice Burroughs.  It was an instant hit with audiences, considered one of the top six motion pictures of the silent era, and one of the first 10 films to earn over one million dollars at the box office.  The film was shot in Morgan City, Louisiana.

The character of Tarzan turns 100 years old this year.  In celebration of that milestone,  Bossier City’s Al Bohl and his daughter, filmmaker Allison Bohl now of Lafayette have teamed up to produce a feature-length documentary entitled, “Tarzan: Lord of the Louisiana Jungle.”
“My interest was first peaked when I was told many years ago that after making the movie the monkeys and apes refused to get back in the cages, so they left them,” said Bohl.  “After research, I found out that the making of the film was as amazing as the movie itself.”
Over a period of four years, Al and his daughter combed through hundreds of photos and documents and videotaped up to seventy hours of interviews and locations.  They interviewed scholars, authors, historians, fans, experts in merchandise, actors, an expert in primates, the curator of the Burroughs’ collection and the family of Edgar Rice Burroughs.  Their travels in Louisiana included Morgan City, New Orleans, Patterson and Baton Rouge.  They also gathered interviews in Los Angeles and Tarzana, California.  More footage was taped in Ohio, Kentucky and Chicago, Illinois.
Bohl said, “Besides the ape question, our documentary investigates many things such as the claims of the killing of a lion on screen, the use of African Americans as natives and the life of Edgar Rice Burroughs who many feel is the father or grandfather of American science fiction.”
In addition, the Bohls re-edited the original “Tarzan of the Apes” silent film and added an entirely new orchestral musical score written by Kermit Poling of Shreveport.
The documentary and new version of the silent Tarzan film will be premiered on April 13 and 14, 2012 in Morgan City during the first Tarzan Festival in the character’s history.  For more information on the festival contact: www.cajuncoast.com.
The Louisiana State Museum in Patterson, LA opens a year-long exhibition entitled “Tarzan: Lord of the Louisiana Jungle.” It features a wide variety of Tarzan memorabilia from the last one hundred years.
“Tarzan continues to be famous on an international scale,” said Bohl, “I believe people will be absolutely amazed by the very large display of Tarzan books and merchandise in this exhibition.”  One item of note is an actual painting done by the chimpanzee that died recently who was believed to be the oldest living “Cheetah” from the Tarzan movies. For more information about the exhibition contact:: www.louisianatravel.com/louisiana-state-museum-patterson.
Posted by All Pulp at 2:40 PM