LEADER IN SUPER HERO COSMIC PULP DOES IT AGAIN WITH 'STELLARAX' 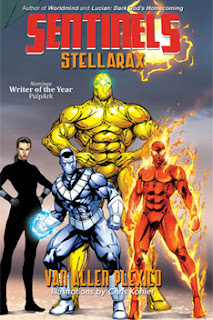 White Rocket Books is proud to announce the publication of the sixth novel in the critically acclaimed Sentinels Saga from Van Allen
Plexico: STELLARAX!

The situation is dire. Four vast and powerful cosmic entities stand poised to destroy the Earth, while the spaceborne nano-virus called
the Blight turns everyone--human and alien--into mindless zombies.

With the mighty Ultraa near death and powerful Vanadium a captive of the enemy, Lyn Li and Esro Brachis have no other choice. They must lead a ragtag group of heroes and villains on a desperate mission. If they’re going out, they’re going out with a bang. It’s one last hurrah-- before the end of the world!

Filled with action and adventure, SENTINELS: STELLARAX sees our heroes through their greatest challenges ever--and no one is the same
afterward.

Says Plexico: "This volume brings to a climax the world-shaking events that have been building from the very start. Readers have patiently awaited the  answers to a number of burning questions about the heroes and their predicaments, and a whole lot of answers are to be found in this book. Keen-eyed readers will spot connections that go back as far as the first chapter of the first volume as everything comes together for the big finish of the "Rivals"story arc. It's the biggest and most ambitious volume yet and I'm
confident longtime and new Sentinels readers will love it. Add in Chris's awesome artwork in the paperback version and you can't possibly go wrong."

In addition, White Rocket is pleased to announce that--for the first
time ever--all six SENTINELS novels are available for the Kindle,
as well as in Epub format for Nook and other e-readers, at the low
price of only $2.99 each!

CRITICAL ACCLAIM FOR THE SENTINELS SAGA:

“Nobody - not even Abnett and Lanning - is doing cosmic superheroes as
well as Van Allen Plexico is doing them. Period.” --Barry Reese,
award-winning creator of The Rook

"Wow does the fun come across to the lucky readers." --Ron Fortier,
Pulp Fiction Reviews

"I was enthralled. I enjoyed them all and still want more. --Mark
Haleuga, Gotham Pulp Collectors Club

Learn more about the Sentinels, with links to order in any format, at:
http://www.whiterocketbooks.com/sentinels

Stellarax at Amazon.com in paperback or for Kindle:
http://www.amazon.com/Sentinels-Stellarax-Van-Allen-Plexico/dp/0984139249
Posted by All Pulp at 6:32 PM