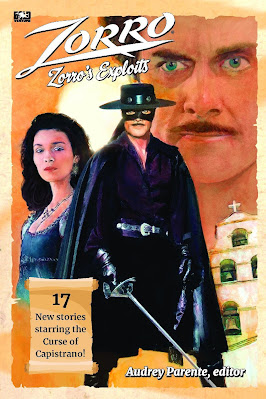 GET READY FOR A JUNE RELEASE OF ZORRO’S S EXPLOITS (cover by Francisco Silva)
In the American pulp fiction magazines, Zorro was the first masked vigilante hero to leap from rooftops, with cape flaring out behind, to stand up for the underdog. For more than 100 years he has moved through time-changing faces and personalities, having new friends and enemies, hiding his identity and revealing himself.

Zorro’s wholesome purpose and conviction has remained steady in print, film and comics. The character created by Johnston McCulley influenced future caped heroes, and that’s a fact. His influence has spread worldwide.

Fans have never quite gotten enough of Zorro, so they try to finish old battles and romances and create new ones in fan fiction they share with each other. Best-selling authors and established artists steal time from their careers to dabble in an opportunity to create their version of this iconic licensed and trade-marked character.

Bold Venture Press presents 17 of those authors and nine of those artists in this volume. Participants are from all across the U.S.A., Canada, Portugal, Italy, and Poland. Come watch as the first caped crusader breathes new life into history, challenges old enemies, encounters mythical creatures, fights the demons, and finds humor in the scuffles with bad guys. Welcome to Zorro’s Exploits.

Sign up for the email announcement at boldventurepress.com
Posted by BobbyNash at 12:33 PM