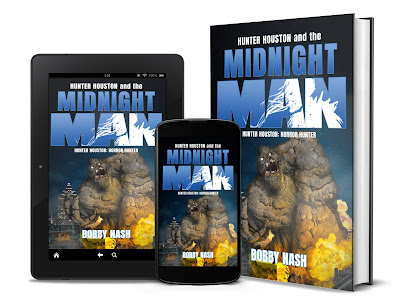 Now available in paperback and ebook! Hunter Houston and The Midnight Man (book 2 in the Hunter Houston: Horror Hunter series by Bobby Nash. Published by Falstaff Books. Read it FREE with Kindle Unlimited.

When it Comes to Hunting Monsters, He's #2!

He is The Midnight Man.

He moves through our nightmares.

You won’t know he’s there until he is ready to strike.

Ten years ago, a special group of teenagers defeated their personal boogeyman, banishing him to a living hell.

With revenge in his heart, The Midnight Man has returned and sets his sights on those who defeated him. At the top of that list is the south’s second favorite horror hunter. Can Houston defeat this cruel demon before he unleashes unimaginable Hell on Earth?

Hunter Houston and The Midnight Man is the second book in the Hunter Houston: Horror Hunter series from award-winning author Bobby Nash. Get yours today!
Posted by BobbyNash at 3:32 PM