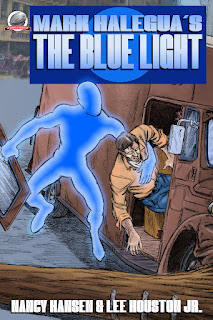 Airship 27 Production is extremely proud to present a very special book in memory of one of pulpdom’s most enthusiastic fans and historians, the late Mark Halegua of New York who passed away last in 2021.

In the midst of the Great Depression, Robert Ackers is an average guy trying to earn his living as a writer living in New York City. When a strange alien medallion comes into his possession and introduces him to an alien entity with incredible powers, his life is altered forever.

The being “in” the medallion has the ability to turn mild mannered Ackers into a bonafide super hero, one encased in a seven foot shell of pure blue light. With super strength, invisibility, speed and even telepathy, the Blue Light arrives on the scene with a bang, so become the dreaded foe of the local mobs and a hero to the neighbor people.

But all isn’t fun and games as Ackers new career puts not only him in danger but also those around him who he cherishes, especially his new girlfriend, Sarah Baker. Inspired by the notes of the late Mark Halegua, writers Nancy Hansen and Lee Houston Jr. spin a wild and crazy story that is thrilling, humorous and always fun from the first page to the last.  Art Director Rob Davis provides the cover and artist Sam Salas the interior illustrations. The Blue Light is here to stay.

“Mark was one of the first people I met when entering the world of pulp fandom,” related Airship 27 Managing Editor Ron Fortier. “He was also one of the biggest New York Yankees fans in the world and when he learned I was a Red Sox fan, well there was no stopping his amusing jabs whenever we would hook up at pulp cons.” Over time Halegua embraced the birth of the New Pulp movement and became one of its strongest supporters, never failing to promote it whenever he could.

“It was Mark’s dream to become a pulp writer,” Fortier concludes. “Nancy and Lee and the entire Airship 27 team are proud to have made that dream a reality. Mark was a kind and loving soul and will live forever in our hearts.”

AVAILABLE AT AMAZON IN PAPERBACK AND SOON ON KINDLE.