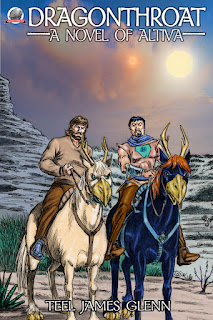 A Novel of Altiva

Airship 27 Production is excited to announce the release of a new fantasy adventure novel by award winning New Pulp author Teel James Glenn, “Dragonthroat.” This is the first tale set in the other-world of Altiva. In the grand tradition of Edgar Rice Burroughs, Glenn weaves a fast paced, colorful yarn set in a truly amazing new world.

Vietnam veteran T.K. Mitchell never thought of himself as anything other than a former grunt doing his best to get by from day to day. Life was boringly routine until the appearance of an old woman calling herself Meegana Kakdon claiming to be a Warp Wizard.

She informs T.K. that he was actually born on another world called Altiva located in a different dimension than ours. A world in which his parents ruled. But traitorous foes plotted to overthrow them and before their deaths, they sent their baby to Earth. Now the time has come for T.K. to return to Altiva and claim his birthright.

In the blink of an eye, and very much against his will, T.K. is warped into a strange alien landscape with two suns, one red and one blue. Soon he encounters a warrior priest known as the Reverent Lord Enrique, the Shoutte of the Shoutte. Realizing the young man is a warp orphan, the cleric decides to be his guide. Day by day, T.K. begrudgingly comes to admire this strange and exotic world. A world filled with both beauty and danger to include the Royal Usurper who will stop at nothing to find and destroy him.

Artist Chris Nye provides the black and white interior illustrations and Award Winning Art Director Rob Davis the cover. Burroughs fans are going to enjoy this new series and rest assured there are many more Altiva stories on the way.