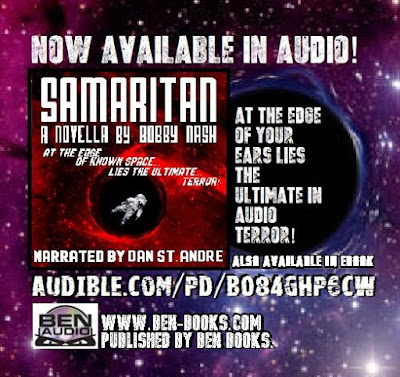 Good news! The audio version of my novella, SAMARITAN has been released. Written by Bobby Nash. Narrated by Dan St. Andre. Published by BEN Books. Samaritan can be found in ebook HERE and in audio HERE and HERE. 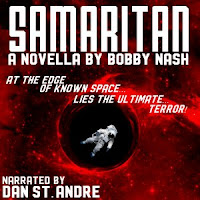 About SAMARITAN:
Deep space.
The science ship Aquarius, under the command of Captain Jeremiah Rains has finally reached the end of its exploratory mission to the depths of uncharted space and is returning home to Earth.
Captain Rains and his skeleton military crew are tired and bored from the lack of adventure they expected to find out in the great beyond. The scientists, however, are extremely happy with their many discoveries.
When the ship comes upon the wreckage of a destroyed space vessel, the crew is surprised to find one survivor; a woman, quite possibly the most beautiful woman any of them have ever seen. Her name is Lari and all she wants is someone, some Good Samaritan, to take her home.
The catch is that her planet is located at the center of a black hole.
Samaritan is a novella by author Bobby Nash, narrated by Dan St. Andre, and published by BEN Books.
Look for the SAMARITAN omnibus in print coming soon with an all-new SAMARITAN II story by Bobby Nash.

SAMARITAN can be found in print int he pages of BEN Books' FRONTIER.
FRONTIER can also be purchased in paperback and ebook at the following:

Posted by BobbyNash at 5:59 PM