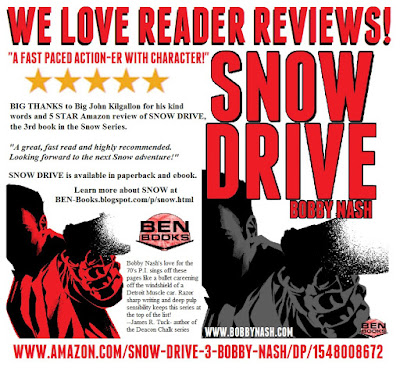 Click Read More... for more Snow...
Bobby Nash's love for the 70's P.I. sings off these pages like a bullet careening off the windshield of a Detroit Muscle car. Razor sharp writing and deep pulp sensibility keeps this series at the top of the list!
-James R. Tuck- author of the Deacon Chalk series


“Sometimes half an inch is all that stands between life and death.”

Abraham Snow's career ended with a single shot, but now he’s back behind the wheel and looking for a saboteur.

Abraham Snow's career ended with a single shot, but his adventures are just beginning.

Snow’s former partner, Samson Brooks, a retired agent turned p.i., arrives in Atlanta with a problem. He’s gotten into some trouble with some bad people and needs Snow’s help to get out of it.

When college student, Katie Masters is kidnapped, snow and his friends leap back into action to rescue her before the Atlanta underworld erupts into all out war.

SNOW STORM is the second book in the continuing adventures of Abraham Snow.


“Bobby Nash is the face of New Pulp. His prose is as sharp as a razor, and
his novel Snow is as powerful as a psycho swinging a baseball bat...”
-- Paul Bishop, author of Lie Catchers, Croaker

“Snow Falls is a griping thriller that Bobby Nash delivers in assured strokes of characterization and a driven plot.”
-- Gary Phillips, author of Treacherous: Grifters, Ruffians and Killers

UP NEXT: SNOWED TRAPPED 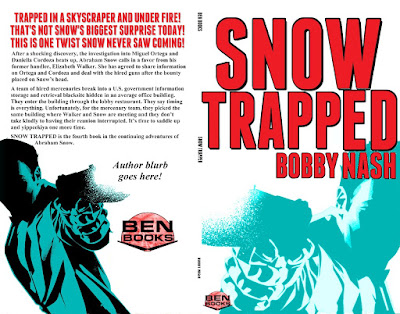 After the shocking reveal at the end of SNOW DRIVE, the investigation into Miguel Ortega and Daniella Cordoza heats up, Abraham Snow calls in a favor from his former handler, Elizabeth Walker. She has agreed to share information on Ortega and Cordoza and to deal with the hired guns after the bounty placed on Snow’s head.A team of hired mercenaries break into an information storage and retrieval site hidden in an average office building in downtown Atlanta. They enter the building through the lobby restaurant. They say timing is everything. Unfortunately, for the mercenary team, they picked the same building where Walker and Snow are meeting and they don’t take kindly to having their reunion interrupted.It’s time to saddle up and yippeekiya because we are SNOW TRAPPED in the next action-packed entry to the Snow series by Award-Winning Author Bobby Nash. On sale May 1, 2018!
Posted by BobbyNash at 10:44 AM