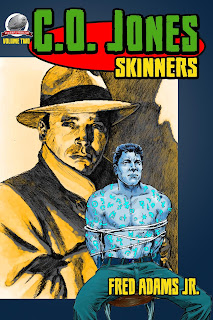 It’s 1949 and army veteran C.O. Jones is living in Los Angeles working as a private investigator.  When he’s hired to find a missing starlet, he soon finds himself embroiled in a sophisticated conspiracy which not only includes kidnapping but high profile blackmail as well.

All of which would be enough to keep any honest, hardworking P.I. busy but when it’s Jones, there is also the added element of magic to consider. Possessing an uncanny ability to recognize arcane abilities in others, Jones begins to uncover even deadlier shadows in the background.  Never mind one of them may actually be a real werewolf with his own personal interest in the case.

“C.O. Jones is one of the most original tough guy heroes ever invented,” claims Airship 27 Production’s Managing Editor Ron Fortier.  “Set against the background of post-World War II America, Adams has given us a rugged, weary character with just a smidgen of the occult mixed in. This is really a fun pulp series not to be missed.”

Award Winning Art Director Rob Davis provides the cover and book design while Florida based art/teacher Javier Lugo turns in his first assignment for Airship 27 with nine marvelous black and white interior illustrations. Thus action in the series shifts to Tinsel Town and with C.O. Jones, often times the monsters aren’t only up on the big silver screen.