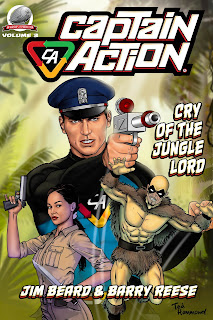 Airship 27 Productions and Captain Action Enterprises LLC, are thrilled to announce the release of the third volume of Captain Action’s new pulp adventures.

1969 - Something mysterious is happening in the depths of the Yucatan jungle and Miles Drake, aka Captain Action has been sent to investigate. His superiors believe their main nemesis, the alien criminal known as Dr. Evil, is hunting something called the Sky Rock; a supposed fallen meteor containing strange energies. But as soon as Drake arrives on the site, he’s met with two other unexpected characters that may or may not be involved with Evil’s nefarious plans.

One of these is a beautiful female Mexican agent named Selena Rubio, whereas the other is a strange masked figure woven from local Mayan myths called the Gibbon, the Protector of the Jungle. Whose side are they on and how does Evil’s actual scheme involve the forthcoming Cape Kennedy space rocket launch? The deeper Captain Action delves into the affair, the more dangerous it becomes with death awaiting him at every twist and turn along this deadly verdant path.

Writers Jim Beard and Barry Reese weave a face paced, new pulp thriller filled action galore, exotic locales and larger than life characters to offer up a great new chapter in the exploits of one of the most iconic heroes of the 1960s, Captain Action. Miles Drake is his name but Action is his game!!

“This entire series was writer Jim Beard’s idea,” Airship 27 Production’s Managing Editor Ron Fortier recaps. “It was Jim who initially hooked us up with Ed Catto and Joe Ahearn of Captain Action Enterprise LLC. Generally, most small publishers avoid working with licensors, but in this case our partnership has been a great working relationship for both companies. No doubt because both Ed and Joe, and their new partner, Michael Polis, are still fanboys at heart.”

The original plan was to have Beard write all three books solo but when scheduling conflicts arose, he turned to another popular New Pulp author, Barry Reese for assistance. A long time fan of Captain Action, Reese was happy to sign on and contributed the bulk of this third original book. Canadian artist Ted Hammond provides the stunning cover and Airship 27 Production’s Award Winning Art Director Rob Davis the interior illustrations as well as book design.