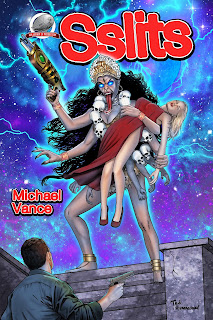 IT CAME FROM
OUTER SPACE

In 1947, just outside of Corona, New Mexico, on a hot July day, a flying saucer crash lands in the desert.  The government immediately sends in the military and has the alien craft and its crew transported to an airbase in Roswell. Four of the five alien voyagers are dead, the fifth, a huge, gelatinous creature, becomes the sole focus of their investigation.

Leading in the study is C.I.A. officer Celeste Gains. By accident she creates both a mental and physical bond with the alien who refers to itself as Sslits. For the next fifty years it will be the entire purpose of her existence. Her mission is twofold. First to keep you him out of the public eye and second, prevent unscrupulous government agencies from exploiting Slits amazing abilities. Among these is nullifying the aging process for her. At ninety, Celeste doesn’t look older than her mid thirties.

When a second Slits arrives on earth, its sole purpose, to locate and destroy the first, Celeste is faced with her greatest challenge yet. Veteran writer Michael Vance offers up both a fresh and frightening look at a “first encounter” unlike anything ever imagined.

“Whether writing about old haunted New England hamlets or monsters from outer space,” says Airship 27 Productions’ Managing Editor Ron Fortier, “Michael Vance has a way of adding a unique creepiness to his fiction that stays with you long after you’ve finished reading. He’s a talented writer of the macabre and “Sllits” is no exception.”