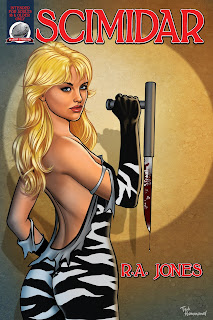 Airship 27 Productions is thrilled to present the first novel based on the action packed, adult comic book  “Scimidar” created by writer R.A. Jones and artist Rob Davis. Between 1986 and 1994, Eternity Comics, a label of Malibu Comics, published creator owned, offbeat titles and none was more original than  “Scimidar” first released in 1988.

Set in a post apocalyptic world of the far future, Jones & Davis’ series told the story of a beautiful, sexy mercenary who would do whatever it took to survive and protect those she loved. “Scimidar” pushed the envelope in regards to fast-paced, action orientated adult fare for its time and is to this day fondly remembered by its legion of fans.

“I was a huge fan of the comics,” says Airship 27 Productions Managing Editor, Ron Fortier. “It was the first series that I remember seeing Rob’s work in and eventually let to my reaching out to him as one comic creator to another. Now, decades later he’s our Art Director here at Airship 27.” Fortier continues to explain how he and Davis often talked about their past comic careers and those projects that remained special in their memories.
Thus “Scimidar” kept coming up over and over again. Eventually Fortier contacted writer R.A. Jones with the idea of his writing a Scimidar pulp novel.  “I was ecstatic when R.A. replied that he’d love to do such a book and of course no one was happier than Rob.”

Now R.A. Jones tells, for the very first time, the secret origin Scimidar in this exciting new, pulp infused novel, while Davis returns as the book’s illustrator. “It was a great pleasure to draw Scimidar again,” Davis adds happily.  “It reminded me that I have never had quite as much fun as a storytelling artist as I did with those comic book stories.” Finally, popular Canadian artist Ted Hammond provides the gorgeous cover of this lethal beauty.

There was never another character like “Scimidar,” before or since. Open this book and find out why.

Now Available at Amazon in paperback and soon on Kindle.