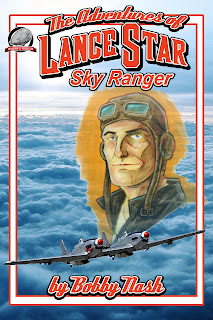 THE ADVENTURES
Of
LANCE STAR – SKY RANGER
By Bobby Nash

Way back in 2005, Airship 27 Productions launched a new series of pulp adventures featuring aviation hero, Lance Star.  One of the four writers recruited for that first volume was Bobby Nash, who quickly found himself completely enamored with the gutsy World War I veteran flyer.  Enough so that in the subsequent three volumes that would follow, Bobby made sure to provide a new story for each.

“It was clear to us,” admits Airship 27 Productions Managing Editor Ron Fortier, “that Bobby had a special love for this character.  Enough so that we transferred the copyrights to him.  Soon thereafter Bobby wrote and had published the first ever Lance Star comic book.”

When Nash approached Fortier a few years ago about publishing the first ever full length Lance Star novel, both parties were immediately on board with the idea.  That novel, tentatively titled – COLD SNAP, should be out sometime in 2017.  To promote its arrival, Airship 27 Productions has collected all four of Bobby Nash’s previously published Lance Star tales in this Kindle Only Edition.  Besides collecting those great pulp stories, this digital collection also includes the first chapter of Nash’s novel as a special bonus feature.

“We’re excited about Bobby’s plans for Lance Star,” concludes Fortier.  “We hope this collection will spur renewed interest in this great high flying hero.  Believe me, with a rising talent like Bobby Nash, the best is always yet to come.”

Available only on Kindle.