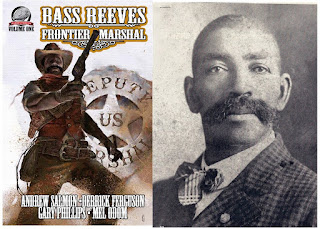 He began his life as a slave. During the Civil War he escaped and lived among the Indians of the Five Civilized Tribes in the Oklahoma Territories. He learned to ride, shoot and track prey from his adopted people. When the war ended, he was recruited as one of the first black deputy marshals in the history of the west.

In a thirty year career, operating under the authority of Judge Parker out of Fort Smith, he captured over three thousand outlaws, was involved in fourteen major gun battles and never wounded once.  At the ended of his career, he became a Deputy Sheriff in Tuskegee until his death at the age of 70.  He is considered the greatest western lawman that ever lived.

“The greatest lawman you never heard of,” states Airship 27 Productions’ Managing Editor Ron Fortier.  “Shamefully because of the color of his skin, Bass Reeves’ exploits were purposely left out of the history books. While we were being taught about the white lawmen of the times such as Wyatt Earp and Wild Bill Hickock, prejudicial teachers did their best to bury the stories of the hundreds of black pioneers who worked, sweated and died to settle the western territories. Brave black cowboys, Buffalo Soldiers and heroes of justice like Bass Reeves; determined to bring law and order to the Wild West.”

Now writers Gary Phillips, Mel Odom, Andrew Salmon and Derrick Ferguson have whipped up four action packed adventures inspired by this legendary figure. Tales of a wild frontier where outlaws and renegades roamed freely until the coming of one amazing man who wore a badge and vowed to bring justice to one and all. He was Bass Reeves – Frontier Marshal.