SENTINELS: WHEN STRIKES THE WARLORD Returns to Paperback!

The Original Volume in “The World’s Greatest Superhero Novel Series” is back in an “Anniversary Edition!” 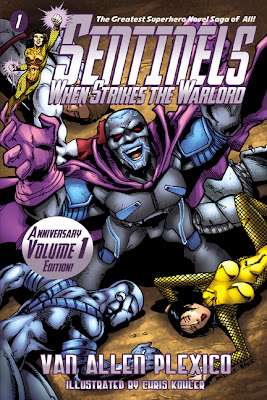 White Rocket Books proudly announces the release in trade paperback format of a newly revised and updated edition of Van Allen Plexico’s SENTINELS: WHEN STRIKES THE WARLORD, the original adventure in the famed and very popular cosmic superhero saga!

Originally appearing in 2008 from Swarm Press, When Strikes the Warlord has only been available as an e-book or as part of the Grand Design Omnibus for over a year.  Now White Rocket brings it back into print as a stand-alone trade paperback, with all the original interior artwork by famed series artist Chris Kohler.

When Strikes the Warlord gets the Sentinels saga off with a bang, as teenaged college student and “science nerd” Lyn Li is attacked by shadowy members of the US Defense Department. Teaming up with beloved but mysterious national hero Ultraa and renowned inventor and billionaire Esro Brachis, she enters a new world of androids, aliens, cosmic space gods, interdimensional conquerors, and more.  When at last they all clash atop the Warlord’s floating city, the existence of the universe itself is at stake!

This new edition has been meticulously re-edited by the author.  Says Plexico, “Because this book is the entryway for many readers to discover my work, I’ve always wanted it to be as strong of a presentation as it could be.  This new Anniversary Edition from White Rocket allowed me to tighten things up in many places—but not one bit of the overall story has been changed!”

The Kindle edition has also been updated to match the Anniversary Edition paperback.

"Spectacular.  Action-packed. Imaginative and wonderful,” adds Pulp Fiction Reviews.  “If you grew up loving the Avengers comic books from Marvel, these books are for you in a big, big way.”

White Rocket Books is a leader in the New Pulp movement, publishing exciting action and adventure novels and anthologies since 2005, in both traditional and electronic formats.   White Rocket books have hit the Amazon.com Top 15-by-Genre and reached as high as #2 on the New Pulp Bestsellers List, and have garnered praise from everyone from Marvel Comics Vice-President Tom Brevoort to Kirkus Reviews.

SENTINELS: WHEN STRIKES THE WARLORD is a $14.95, 6x9 format trade paperback from White Rocket Books.  (Other volumes in the series are available in two omnibus paperbacks, and each is a $2.99 or $3.99 e-book for Kindle and other e-readers.)

Visit the Sentinels page at the White Rocket site at www.whiterocketbooks.com.