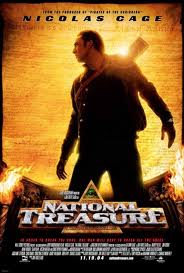 I had heard a lot about NATIONAL TREASURE before I saw it.  Friends of mine told me to see it because it reminded them of something that I would write.  Roger Ebert just about called it an out-and-out rip off of “The DaVinci Code”.  Other people said it was boring, stupid, trite, a rip-off of this or that movie or character, mostly Indiana Jones or Clive Cussler’s Dirk Pitt
I saw it for myself and you know what was the most surprising thing to me about the movie was?  That this was a Jerry Bruckheimer/Nicolas Cage collaboration that didn’t have any of the qualities that were evident in their other films together such as “Con Air” or “The Rock”.    This is an action movie, yes.  But when you compare it to what we call action movies today, it’s practically a throwback.  There is only one explosion, one car chase, one shootout, one death and even that is due to the poor dumb bastard who gets killed making a wrong step.  NATIONAL TREASURE is a movie that plays as if Cage and Bruckheimer had deliberately sat down and said: “let’s do an action movie that’s totally different from what we’ve done before.” and in doing so, they’ve given today’s audience what amounts to an updated version of my beloved pulp adventure serials from the 1930’s/1940’s.
Benjamin Franklin Gates (Nicholas Cage) has spent his entire life looking for a treasure that has passed from Emperors to Kings to Pharaohs and finally to The Founding Fathers of The American Government.  The treasure has grown to such enormous wealth that supposedly it’s “too large for any one man or nation to own” and The Knights Templars protected it in for hundreds of years until it was moved to along with The Knights Templar who became The Freemasons.  The Freemasons counted among their members such notable Founding Fathers such as George Washington, Thomas Jefferson, Paul Revere and Benjamin Franklin who left clues scattered among the various works they left behind as to where this fabulously immense treasure could be found. 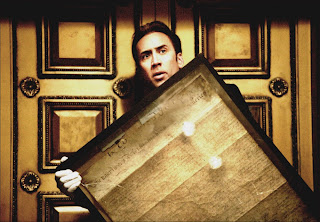 Gates has discovered that the map to where the National Treasure is located is on the back of The Declaration of Independence.  What is unfortunate is that he can get nobody to believe him, especially The FBI or Dr. Abigail Chase (Diane Kruger), who is a curator at The National Archives.  When Gates tells her about the invisible map that is on the back of The Declaration of Independence and has been there for hundreds of years undetected she asks him quite seriously: “Who wrote it there?  Bigfoot?”
Gates doesn’t have much time to try and change the minds of the FBI or Dr. Chase since his former partner Ian Howe has double-crossed him and intends to steal The Declaration and find the treasure.  Gates decides that the only thing to do is steal The Declaration of Independence himself, along with his brilliant tech-savvy sidekick Riley Poole and find the treasure before Ian does.
NATIONAL TREASURE has a lot going for it in the way it handles the characters and the motivations behind what they’re doing.  Gates is not a treasure seeker in the conventional sense and indeed, he keeps telling people that he’s a ‘treasure protector’.  He’s looking for the National Treasure to vindicate his family name since The Gates Family are looked upon as crackpots by the historical/archeological community for believing that the treasure is real.   And he’s got a diverse and interesting background as shown by a scene where the FBI Agent assigned to catch Gates (played by Harvey Keitel) reads Gates’ file.  Gates has degrees in a whole bunch of diverse fields, which leads Keitel to muse; “I wonder just what this guy wanted to be when he grew up”. 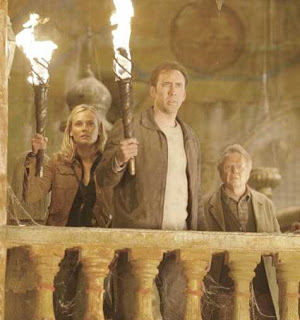 And the relationship between Gates and his rival Ian is interesting and well handled as well.  For once, the bad guy in a movie isn’t a bloodthirsty maniac out to kill everybody in his way.  In fact, Ian tries to go out of his way not to kill anybody because as he sensibly explains to one of his gun happy henchmen: “The authorities tend to want to find out why dead bodies have bullets in them and who put them there” As a matter of fact, NATIONAL TREASURE is one of the few action/adventure movies I’ve seen recently where the bad guy actually has good reasons for why he doesn’t kill the hero when he has a chance to, especially in a scene near the end where Ian leaves Gates and his sidekicks alive in a secret tomb underneath New York’s Wall Street when he certainly would have reason not to.  It surprised me and that’s not easy for movies nowadays to do.
I liked a lot of the performances here.  Nicholas Cage looks more at home playing Benjamin Franklin Gates than any of the other characters in his other action movies he’s done with Bruckheimer and maybe that’s because Gates isn’t an Indiana Jones, despite what you may have read or heard.  Gates isn’t a super martial artist or expert gunman or daredevil adventurer.  He’s an historian searching for vindication of his family’s dream and he plays it that way.  When he’s confronted with bad guys brandishing automatic weapons he runs like his ass is on fire and he only stops to fight when he has no other way out.  What makes him dangerous is his brainpower: he sees connections and can make them faster than anybody else and he’s smart enough to know that about himself and use it to his advantage.
Sean Bean is absolutely great as Cage’s rival in the race for the treasure and you get the sense that a lot of the reasons why he doesn’t kill Gates is that he really admires and respects Gates’ knowledge and resourcefulness.  Jon Voigt has a lot more to do here as Patrick Henry Gates, the father of Cage’s character than he had to do as Lara Croft’s father in “Tomb Raider”.  Justin Bartha as Riley Poole is one of the best sidekicks I’ve seen in recent moves and he has a wonderful scene where he proves just how much that a sidekick can enhance the hero’s character.
The main selling point for me with NATIONAL TREASURE, that it isn’t an Indiana Jones type of cliffhanging-thrill a minute-claw your date’s arm-type of movie.  It’s more in the nature of a scavenger hunt and the fun comes from seeing Cage’s character and his sidekicks put together the clues and piece them together.  Not that to say that there aren’t thrills aplenty: this is an exciting movie with fights, captures, chases and plot twists.  It’s just that it isn’t packed with explosions, car chases and deaths every five minutes 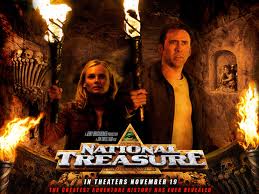 Having said all that let me say that I recommend NATIONAL TREASURE wholeheartedly.  I had an excellent time with the story and characters and I don’t even think you’ll miss the usual mayhem that we expect from a Bruckheimer/Cage action movie.  Are there holes in the plot holes and flaws?  Sure there are.  Cage and his crew find a ship that has supposedly been buried in the Arctic ice for hundreds of years far too easily.  And would gunpowder burn after being buried under the ice for that long a time?  And there’s another scene later on where Cage and his crew just happen be standing at the tower where The Liberty Bell is kept so that the shadow of the sun will be cast at just the right moment at just that right moment so they can find another clue to the treasure.  But by that time I had been so captivated by the performances and the sheer audacity of the story’s premise I was just watching and saying to the movie; “what the hell, let’s go.”  And I suppose that’s the best way I can tell you to take your viewing of NATIONAL TREASURE: sit back in your seat with your soda, popcorn, candy and say: “what the hell, let’s go.” Movie studios don’t make Saturday Morning Serials anymore but every so often they do make movies like NATIONAL TREASURE to remind us that once upon a time they did.