The Evil in Pemberley House

REVIEWS FROM THE 86TH FLOOR - Book Reviews by Barry Reese 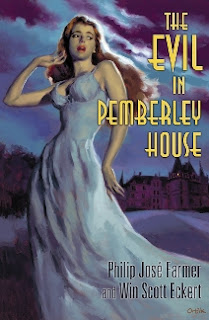 THE EVIL IN PEMBERLEY HOUSE
Written by Philip Jose Farmer & Win Scott Eckert
2009
ISBN 978-1596062498
First, let me quite honest about something: while I enjoy a little bit of the Wold Newton stuff, there are times that I think it goes overboard and ruins my enjoyment of certain stories. It's neat to see crossovers but exhaustive attempts to fit every fictional character into the Wold Newton framework makes my eyes glaze over in the same way that listening to someone tell me all about their family tree does.
So, having said that, let me also point out that I have enjoyed a number of works by Philip Farmer over the years, including A Feast Unknown, his over the top erotic interpretation of Doc Savage and Tarzan. I mention Feast here because The Evil in Pemberley House exists in that same sort of world: a world where everyone has deep-seated sexual neuroses and the authors aren't afraid to continually point out the size of the bulges in every man's pants.
The Evil in Pemberley House is an homage to the Gothic horror tradition. Patricia Wildman, daughter of the world-renowned adventurer Dr. James Clarke "Doc" Wildman, is all alone in the world when she inherits the family estate in Derbyshire, England. The estate is old, dark, and supposedly haunted. Along the way, Patricia engages in much worry over her incestuous desires for her father (who is missing when the story begins and believed dead). She's sexually victimized by another woman early on but recovers enough to go forward on a journey that's as much about her sexual exploration as it is the hauntings that have made Pemberley House infamous. There are direct ties to a classic Sherlock Holmes tale and the setting is straight out of Pride and Prejudice. The Wold Newton elements weren't particularly intrusive early in the book but towards the end, there were parts where I wondered how much stronger this story would have been if the focus had been a little tighter on the story at hand.
The writing is quite fluid and feels very Farmer-esque. I'm not sure how much rewriting or original writing that Eckert had to do but the fact that I can't pick out which parts are his is a credit to his work.
I liked Patricia's character quite a bit and the overall Gothic trappings really worked when she first arrived at Pemberley and the mystery was first unveiled. I wasn't completely pleased with the way things played out but it was still fun seeing Pat Savage -- er, I mean Pat Wildman -- adventuring on her own in Pemberley. The ending screams sequel and I hope that Win Eckert picks up the pieces and takes us further with Pat. This was a lot of fun, though as I've said, I always think Wold Newton pieces would be stronger stories with more focus and less attention to tying things together.
The Evil in Pemberley House gets 4 out of 5 stars from me.
Posted by The Rook at 7:03 AM