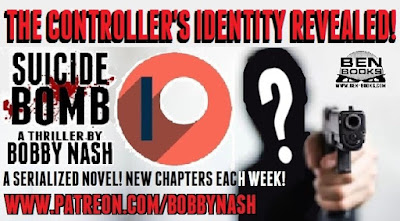 The Controller's identity revealed at last! 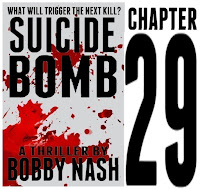 The story so far...
A methodical killer known only as The Controller has nearly perfected a procedure that can turn anyone into an assassin from afar. After carrying out the pre-planted assignment, the assassin then kills themselves. DC Metro Homicide Detective Catherine Jackson has been assigned a case that puts her on The Controller's radar and he has become fascinated with her. Secret Service Agent, Samantha Patterson is also assigned the case. Jackson and Patterson agree to work together. While Jacks deals with a family matter, Agent Patterson and Detective Walker question their suspects. Twists follow turns as The Controller's next targets are revealed.

The only way to read SUICIDE BOMB is to subscribe to Bobby Nash's Patreon page at www.patreon.com/bobbynash for as low as $1 a month. $5 enrolls you in Bobby's monthly book club.
-----
Your support helps me continue to create brave new literary worlds. It is appreciated.
Bobby
Posted by BobbyNash at 2:47 PM