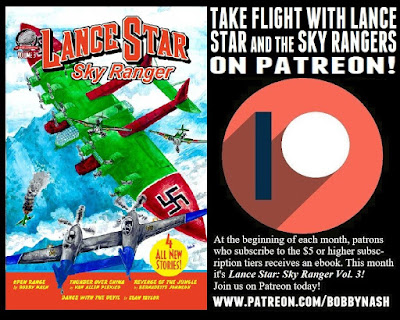 Members of author Bobby Nash's Patreon ebook of the month club ($5 and up tiers) received their first book for June today. It's a blast from the past as Bobby and his patrons revisit Lance Star: Sky Ranger Vol. 3. Want to join the book club? It's easy. Join them at www.patreon.com/bobbynash and choose tiers $5 or higher and help Bobby keep creating bold new worlds. 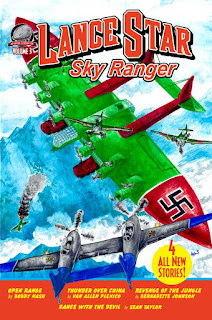 ADVENTURE TAKES TO THE SKIES

In this third volume, Lance and his daredevil Sky Rangers face off against Oklahoma cattle rustlers, Chinese warlords, jungle magic and a saucy British femme fatale who flirts with danger at ever turn. New Pulp writers, Bobby Nash, Bernadette Johnson, Van Allen Plexico and Sean Taylor spin their yarns of incredible bravery and daring among the clouds that will hold the most jaded reader spellbound.

So release the chocks, kick the props and pull back on the stick as adventure once again takes to the skies in Airship 27 Productions latest high flying anthology. All the art for this book was provided by talented newcomer, Shannon Hall, to include twelve black and white interior illustrations and a stunning, fully painted cover. Designed by Rob Davis and edited by Ron Fortier, LANCE STAR – SKY RANGER Vol. III is another quality addition to this soaring pulp series you won’t want to miss.

Posted by BobbyNash at 3:28 PM