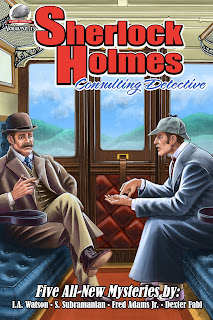 In their recorded exploits, Sherlock Holmes and Dr. Watson faced all kinds of mysteries; from the mundane to the most foul and insidious. They solved riddles involved with blackmail, thievery and murder, each with the same devotion to serving justice no matter the outcomes.

In this latest collection of the bestselling series, Holmes and Watson will deal with three women all claiming to the heir to a fortune, the brother of an old foe seeking revenge and a severed head sent to their apartment at 221 B Baker Street. Writers I.A. Watson, S. Subramanian, Fred Adams Jr. and Dexter Fabi have created thrilling new adventures that will challenge the detective duo in the most bizarre ways ever imagined.

A unique element of this volume is the cover by Michael Youngblood.  As Airship 27 Productions Manager explains, “For years, Sydney Paget was considered the premier Sherlock Holmes artist having done the illustrations for Arthur Conan Doyle’s original tales when they appeared in The Strand Magazine. Many of these are just as familiar as the stories themselves.”

Since the conception of the Consulting Detective series at Airship 27, Art Director Rob Davis has handled the illustrations. In the past ten years he has done over 150 gorgeous; several for which he won awards. Fortier continues, “I’m always saying Rob is the new Sydney Paget which led to this idea of taking one of Paget’s most popular pieces and having one of our artists do a cover interpretation of it. Which is what Michael Youngblood has done far exceeding our expectations.”

Quality stories and beautiful artwork, the hallmarks of Airship 27.

Available from Amazon in paperback and soon on Kindle.