MILTON DAVIS RETURNS TO MEJI WITH WOMAN OF THE WOODS 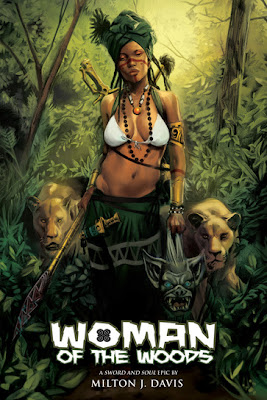 Woman of the Woods
The new Sword and Soul novel by Milton Davis!

The latest Sword and Soul novel by Milton Davis returns to the land of Meji, the amazing world of Uhuru. It tells the story of  Sadatina, a  girl on the brink of becoming a woman living with her family in Adamusola, the land beyond the Old Men Mountains. But tragic events transpire that change her life forever, revealing a hidden past that leads her into the midst of a war between her people and those that would see them destroyed, the Mosele. Armed

with a spiritual weapon and her feline 'sisters,' Sadatina becomes a Shosa, a warrior trained to fight the terrible nyokas, demon-like creatures that aid the Mosele in their war against her people.

Woman of the Woods is an action filled, emotionally charged adventure that expands the scope of the world of Uhuru and introduces another unforgettable character to its heroic legends.

Posted by BobbyNash at 1:48 PM