NEW RELEASE: VALHALLA BOOKS PRESENTS 'THE DEVIL'S DUE' IN EBOOK. PAPERBACK TO FOLLOW. 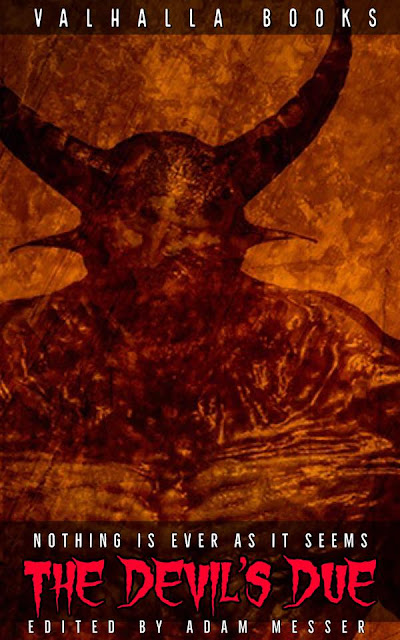 Valhalla Books is pleased to announce the launch of The Devil's Due anthology. The ebook premiered on Halloween Day, appropriately enough. The paperback will be available early November. I joined the publisher, editor, and several authors for a book launch for The Devil's Due on ConTinual: The Con that Never Ends. You can watch The Devil's Due launch party HERE.
Bobby

The Devil’s Due
A horror anthology
Nothing is ever as it seems. Ill-begotten wealth, fame, and glory come at a high price.
Featuring award winning authors and Horror Writers Association members, The Devil’s Due offers enthralling horror stories of underhanded deals gone awry.
---
The Resurrection and the Life - Jude Reid
"First do no harm."
They were supposed to be the words Alec Duffy would live his life by -- instead, there's a dead man at his feet and blood on his hands. It's going to take a miracle for Duffy to graduate with his life, his reputation and his future intact -- but in the depths of a hard Glasgow winter, miracles are thin on the ground.
Dante's Tenth - Bobby Nash
Dante, Arizona is not your average mining town. Those who came to this barren speck of desert struck it rich. Gold, silver, and other valuable minerals are there for the taking. This brings new blood to town as well as old blood. When a young reporter’s assistant becomes enamored of the daughter of a new arrival, he learns the terrifying truth behind the town. The townsfolk made a deal and payday is coming.
Identity Theft - Rachel Brune
A deal with a Fallen One is signed, sealed, and delivered in blood. Brent Whitehall, however, claims he never signed on the Devil’s line, and hires Hell’s private investigator to clear his name.
Here Comes Mr Herribone! - Tim Jeffreys
Jim Game and his partner, Tommy, work the comedy circuit without success until Tommy invents the character of Mr Herribone. With his sackcloth head, pratfalls, and song and dance routines, Mr Herribone is a hit. Soon Jim and Tommy are doing sold out gigs and TV shows. But did Tommy really invent Mr Herribone? Or did he strike a deal with someone, something, somewhere? And the price of that deal? Jim is about to find out.
Genevieve and the Owl - Mark Allan Gunnells
Once upon a time...a lovely young woman who dreamed of escaping the poverty and abuse of life with her step-father and step-brothers. Then she met a creature in the form of an owl that offered her three wishes. Could a strategic use of these wishes lead her to a happily ever after...or to destruction?
The Plan - Josh Vasquez
A detective surveys a grisly crime scene straight out of a horror movie and wonders: was this a random slaying or a long thought out revenge plan gone wrong?
Face It - Carol Gyzander
Connor's lost money, prestige and society connections due to his wife Amy's disfiguring disease. Shunned by the same friends that made them the "it couple," he ponders her request for help in ending it all. She says it's what she wants, right? Right?
Mary's Secret- Winfield Strock III
Who knows what the future brings? What would you do to ensure a favorable outcome? In the midst of the American Civil War, Mary found herself tempted to save her husband and her country through a deal with dark powers. She thought she knew the hidden price and was prepared to pay it, but the depths of evil plumb deeper than mortals can fathom.
Saddie's Choices - Ravyn Crescent
Time was up. That was the heart gripping feeling Saddie had grappled with many times in her life— a life that was going to be cut short. Ten years ago, she’d burned her bridges and signed Lucifer’s contract, giving her ten years of freedom and love. Now she has to fight his demonic collection agents or risk losing everything, including the love of her life.
And the clock is ticking.
The Devil You Know - Shane Nelson
When Paul Block’s best friends die in a tragic accident, he finds out that he is the guardian to their newborn daughter. Losing his friends and becoming a single father prove too much for Paul, so when a stranger offers him a chance to get his old life back, he takes it. But he soon discovers that we’re all responsible for our actions and when it comes to signing contracts, the devil is in the details. 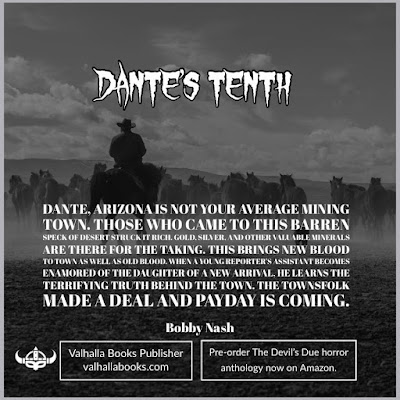 The Devil's Due can be purchased at the follow retailers:
Amazon US (Kindle)
Amazon CA (Kindle)
Amazon UK (Kindle)
Paperback coming soon.
Nothing is ever as it seems.
Ill-begotten wealth, fame, and glory come at a high price.
The Devil’s Due offers enthralling horror stories of underhanded deals gone awry.
Check out the teaser trailer for the upcoming anthology The Devil's Due by Dead Pixel Pictures. You can watch it HERE or below. You can also pre-order The Devil's Due now HERE!
Watch The Devil's Due launch party at ConTinual HERE.
Posted by BobbyNash at 5:01 PM