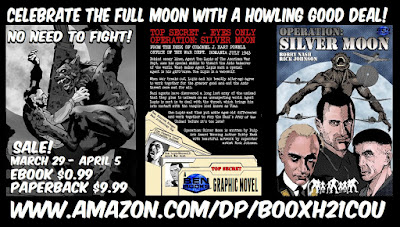 You can read Operation: Silver Moon FREE with your Kindle Unlimited subscription. Paperbacks autographed by Bobby Nash can be purchased at https://bobbynash.square.site for the regular cover price of $14.99. 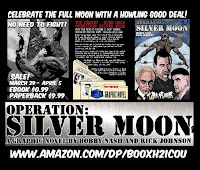 About Operation: Silver Moon:
TOP SECRET - EYES ONLY! ROMANIA, JULY 1943. Behind enemy lines, Agent Tom Lupis of the American War Department uses his special skills to thwart the Axis takeover of the world. What makes Agent Lupis such a unique agent is his gift/curse? Tom Lupis is a werewolf. When war breaks out, Lupis and his beastly alter-ego agree to work together for the greater good and end the Axis threat once and for all.

In Operation: Silver Moon, Nazi agents have discovered a long lost army of the undead that they plan to unleash on an unsuspecting 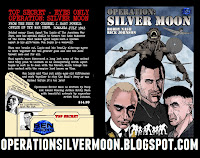 world. Agent Lupis is sent in to deal with the threat, which brings him into contact with the vampire lord known as Vlas. Can Lupis and Vlas put aside their ages old differences and work together to stop the Nazi's Army of the Undead?

Posted by BobbyNash at 7:00 AM