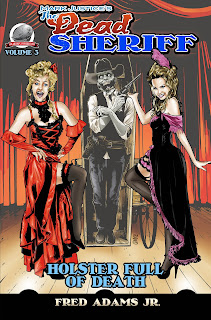 Over a eleven years ago, writer Ron Fortier and artist Rob Davis partnered to create a new publishing venture that devoted itself to producing New Pulp novels and anthologies featuring classic pulp characters from the 30s and 40s. That outlandish idea they named Airship 27 Productions. Since that time, Airship 27 has become an energetic part of the pulp community, not only revitalizing classic pulp figures such as Secret Agent X, Domino Lady and Captain Hazzard, but newer creations as well such the late Mark Justice’s weird western hero, the Dead Sheriff.

The mysterious Master has been seeking the half-breed Indian Sam who rode with the Dead Sheriff as his companion Cheveyo. All of which is a ruse, as the fable zombie lawman is nothing more than a puppet corpse manipulated by Sam through the use of a magic amulet; an amulet Sam stole from one of the Master’s agents.

When the Great Castwell’s traveling magic show appears claiming to have the Dead Sheriff as one of its acts, the Master dispatches the demonic twins Damon and Emile Loizeux to investigate. They discover that Castwell is a fraud and his Dead Sheriff merely an actor in disguise. Still, if allowed to continue, the show will ultimately attract Sam and his pal, journalist Richard O’Malley. Thus the bait is put on full display setting up a confrontation that will be both horrific and cataclysmic.

“After releasing the first Dead Sheriff novel several years ago to honor a promise I made my friend Mark Justice, I then went on the finish the second he had begun before his passing,” reports Airship 27 Productions’ Managing Editor, Ron Fortier. “With it completed, we made the decision to keep the series alive (pun intended) if we could find other of our stable writers willing to do Dead Sheriff tales. Right out of the gate we got one of the best.”

Veteran pulp writer Fred Adams Jr. creates a fast paced weird western thriller featuring the characters created by the late Mark Justice adding to the saga of the west most bizarre hero, the Dead Sheriff. Airship 27 Art Director Rob Davis provides the nine black and white interior illustrations and Chris Rawding the truly beautiful cover. A special limited collector’s edition of the book debut at the recently held Pikeville Comic & Toy Collection in Kentucky. The first copy was presented to Mrs. Norma Kay Justice, Mark’s widow. And now it has the distinction of officially being the company’s grand 200th release!