Here's your first look at Bobby Nash's Abraham Snow character as painted by Jeffrey Hayes. Learn more about Snow at www.ben-books.com under the SNOW tab.

Here's a side by side comparison of his first image and the finished headshot. 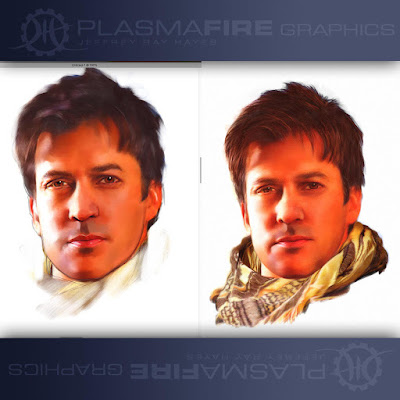 Says Jeffrey Hayes about this image:
Well, today promises to be a WIP Sneak Peek Tuesday. Here is another work-in-progress sneak peek at the poster / book cover work for author Bobby Nash’s “Snow” series. One of the most important elements is to establish the look of the main character and after receiving some guidance from the author, I was able to create a character design that he approved. The picture on the left is the basic paint and the one on the right is the refined version that will be the final image of Abraham Snow. Now to move on to his rifle and tac-vest which will take the remainder of the week to complete. I will have another quick sneak peek to post shortly. Have a great week! #thesummerofsnow 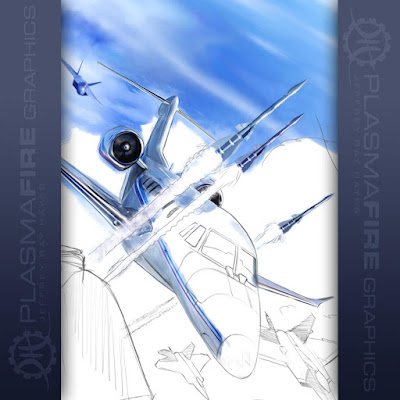 Says Jeffrey Hayes about this image:
Here is the final WIP sneak peek for a few days while I continue to work and enjoy the upcoming holiday. So this is the scene that appears in the upper right quadrant of the poster / book cover for author Bobby Nash’s “Snow” series. The full illustration will have the central character and four action scenes surrounding the main character of Abraham Snow. This scene shows the Snow’s Learjet under fire by some surface to air missiles and some F-22 Raptors flying alongside. Are the Raptors chasing or escorting? Why did the missiles miss the Learjet? You will have to find out. Until then, check out Bobby’s “Snow” series on Amazon. You can see more art at my Instagram page @plasmafiregraphics or see different artwork at www.plasmafiregraphcis.com. Make it a badass day! #thesummerofsnow
-----

I am absolutely blown away by Jeffrey's work on these Snow images. I can't wait until we can unveil the final, finished piece.

Bobby
Posted by BobbyNash at 3:21 PM