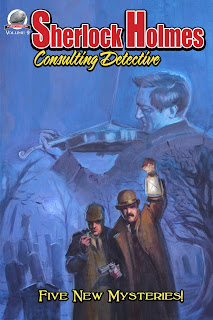 Once again, hidden on the fog shrouded streets of London are heinous criminals set upon their nefarious schemes. All that stands in their way are two men, stalwart and unafraid to take on villainy in all its insidious disguises; Sherlock Holmes and Dr. Watson.

“Every single time we put out a new volume, our Sherlock Holmes fans are delighted,” says Airship 27 Production’s Managing Editor, Ron Fortier.  “Honestly, they devour each one and then within weeks of a new release, I’m getting mail asking when the next one is coming out. The popularity of these characters appears to be as strong as ever to readers around the world.”

In this, the ninth entry in this bestselling series, the crime solving companions tackle five brand new mysteries that are totally unique from any of their previous adventures. Among these; an entire crew of a shoreline light house vanishes during a raging storm, one of Watson’s old army colleagues is accused of murder and a former Baker Street Irregular seeks out their aid on behalf of his crippled father. These three cases and two others are brilliantly delivered by writers I.A. Watson, Fred Adams Jr., Erik Franklin and Aaron Smith. Proving once again there is only one Sherlock Holmes, Consulting Detective.

Airship 27 Productions’ Art Director, Rob Davis provides the black and white interior illustrations as he has done with all previous volumes and Adam Shaw delivers a truly striking cover.  Sure to be another winner from the leading publisher in New Pulp fiction.