THE AVENGER: ROARING HEART OF THE CRUCIBLE NOW AVAILABLE FOR PRE-ORDER 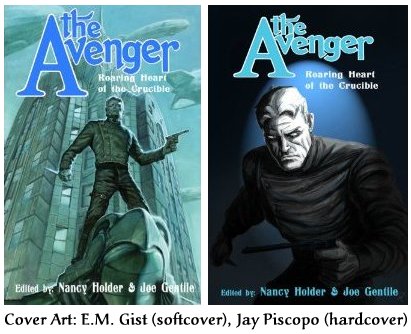 Moonstone Books’ third anthology collection chronicling new tales of pulp hero, The Avenger is now available for pre-order on Amazon. Titled, THE AVENGER: ROARING HEART OF THE CRUCIBLE, the book is scheduled for release in April 2013 in both softcover trade paperback and limited edition hardcover.

The greatest crime-fighter of the 40's returns in a third thrilling collection of original, action-packed tales of adventure, intrigue, and revenge. Life was bliss for millionaire adventurer Richard Henry Benson until that fateful day crime and greed took away his wife and young daughter... and turned him into something more than human. Driven by loss, compelled by grief, he becomes a chilled impersonal force of justice, more machine than man, dedicated to the destruction of evildoers everywhere. A figure of ice and steel, more pitiless than both, Benson has been forged into an avatar of vengeance, possessed of superhuman genius supernormal power. His frozen face and pale eyes, like a polar dawn, only hint at the terrible force the underworld heedlessly invoked upon itself the day they created... The Avenger!

Exclusive HC BONUS material: An Avenger timeline by Rick Lai, a story by John Small, plus solo tales of the Avenger's aides by Howard Hopkins!

The Avenger: Roaring Heart of the Crucible will be in store April 2013 from Moonstone Books. You can order the softcover trade paperback and limited edition hardcover now.

Posted by BobbyNash at 9:59 PM