MARK ELLIS IS READY TO ROCK! 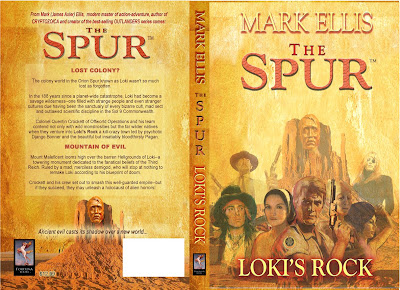 New Pulp Author Mark Ellis has announced that his latest novel, The Spur: Loki's Rock is now available at Amazon and other online booksellers.

The colony world in the Orion Spur known as Loki wasn't so much lost as forgotten. In the 188 years since a worldwide catastrophe destroyed what passed for civilization there, Loki had become a savage wilderness of strange cultures, as well as being the sanctuary for every bizarre cult, mad sect and outlawed scientific discipline in the Sol 9 Commonwealth. Quentin Crockett, a Colonel in the department of Off World Operations leads a team of specialists to Loki to monitor, catalog, and if necessary, eliminate the myriad societies that sprang up in the wake of the global cataclysm.

In their armored ACP Ambler, the team travels Loki, searching for the lost Terran Enclave, while fighting off not only wild beasts, and the wilder natives but also the ruthless schemes of a mastermind about whom they know practically nothing.

In The Spur: Loki’s Rock, Crockett and his team contend with the bizarre native fauna, but also with resurrected Nazi supermen, flocks of flying piranha, and the denizens of the kill-crazy town of Loki’s Rock, led by the psychotic Django Bonner and his bloodthirsty hench-wench, Pagan.

Ellis, the veteran author of 50 books as well as numerous comic properties, including such classics as: Death Hawk, The Justice Machine and Doc Savage: Man of Bronze, spent 15 years writing novels for Gold Eagle, the action-adventure imprint of Harlequin Enterprises. Under the pen name of James Axler, he created the best-selling Outlanders series, now in its 15th year of consecutive publication, making it the most successful mass-market paperback genre series published in the last 25 years.

Learn more about The Spur: Loki's Rock here and here.

Posted by BobbyNash at 2:25 PM