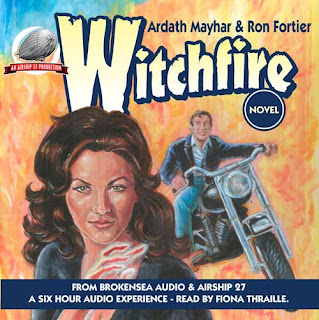 The first Airship 27 Productions audio book is now available for sale at the Airship 27 Productions website; “Witchfire” by Ardath Mayhar & Ron Fortier.  (See link below.)  Produced in conjunction with Broken Sea audio, the six hours plus book features reader Fiona Thraille and was engineered by Chris Barnes.
“We could not be happier with the final product,” said Airship 27 Editor in Chief Ron Fortier, also one of the co-writers of the book along with the late Ardath Mayhar of Texas.  “I’m not sure if any of Ardath’s many science fiction or fantasy novels were ever adapted to this format. I hope her many fans will truly enjoy this audio version which is dedicated to her memory.”
Along with the release of this, Airship 27 is also releasing a Kindle version of “Witchfire.”  The company released its first Kindle title, “Captain Action – Riddle of the Glowing” by Jim Beard only last week.  “We are really excited about these new formats,” Fortier went on.  “Our readers have been asking for them and finally we have the capability to provide them with this multiple formats.  Expect to see many more of our books on both Kindle and as audio downloads.”
For now only audio file downloads will be available, selling for $9.99.  Airship 27 does hope to eventually press CD copies as well.  The company, started six years ago is devoted to publishing brand new pulp novels and anthologies and is operated by Fortier and his partner, Art Director Rob Davis.
AIRSHIP 27 PRODUCTIONS – Pulps for a New Generation!
Get Your Copy here!